The Arrival of my Ancestors ~ Waitangi Day

Today is Waitangi Day in New Zealand. It commemorates the date the Treaty of Waitangi was formally agreed between the Māori tribes of Aotearoa/New Zealand and the Queen of England way back in 1840. For all the Treaty’s faults, it helped pave the way for my ancestors to emigrate and settle in New Zealand. So, I thought I’d list when each of my immigrant family members arrived and their ships, where known. 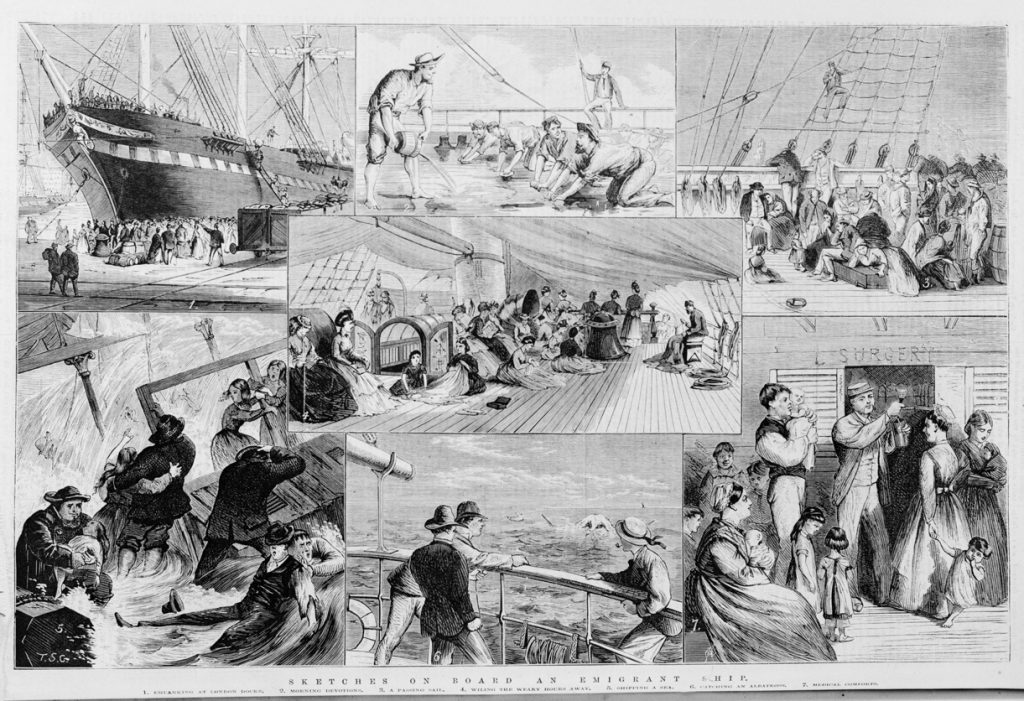 Sketches on Board an Emigrant Ship ~ The Illustrated New Zealand Herald, 9 April, 1875

George Tunnecliff(e) from Staffordshire and Elizabeth Barber from Sussex, my 3 x great grandparents, travelled on the Dinapore which left London on 13 April 1857.1 Did they know each other before they sailed, or did they meet on the ship? Also on the ship were Elizabeth’s employers from London, the Yates family. Did they pay for her ticket, and was she expected to work for them on arrival in New Zealand? In any case, George and Elizabeth married in Auckland, three days after arriving.

Michael Gaff(a)ney, my 2 x great grandfather born in Derbyshire of Irish parents, took advantage of the assisted immigration scheme and departed London aboard the Cresswell on 27 May 1859, arriving in Lyttleton on 12 September 1859.2

Michael McGonnell from Co Down arrived in New Zealand around 1861, according to his death certificate. It’s unclear how he travelled to New Zealand. He had joined the Royal Navy in 1858, and did a runner from HMS Foxhound in June 1861. He later married George and Elizabeth Tunnecliffe’s daughter, Louisa.

Margaret Brosnahan, my 2 x great grandmother, and her brother John, from Co Kerry, sailed from Gravesend on 10 September 1862 as full-paying passengers on the Echunga, and landed at Timaru on 16 December 1862.3 Apparently Margaret was the first girl down the gangplank, and Michael Gaffaney took one look at her and vowed to marry her. They married a year later.

Martin Burke and his wife Ann (Philp), my 2 x great grandparents, sailed on the Mermaid from London as assisted immigrants along with their five month old daughter, Mary.4 Martin was born in Co Mayo and had emigrated to Perth, Scotland with his family around 1850. Ann was originally from Fife, Scotland.

Edward Horne and his wife Elizabeth (Rose), my 3 x great grandparents, left Cape Town, South Africa, on 27 September 1864 aboard the Alfred, along with their six month old daughter, Annie.5 Edward was originally from Warwickshire, while Elizabeth was born in Cape Town. They were assisted immigrants, taking advantage of the Waikato Immigration Scheme.

My 2 x great grandfather, Bartholomew O’Rourke from Co Kerry, sailed on the Blue Jacket and arrived in the West Coast goldfields around 1866, according to his obituary, although I can find no corresponding passenger list to confirm this. He may have travelled via the Australian goldfields.

Bridget Power from Co Tipperary arrived on the West Coast goldfields sometime around 1867. In 1869 she married Bartholomew O’Rourke.

Henry Florey from Kent, my 3 x great grandfather, sailed from Gravesend on 22 October 1874 aboard the Avalanche, along with his wife Elizabeth (Byford), their son Forrest, and Henry’s son from a previous relationship, Henry John Forrest.6 Henry junior married Annie Horne in 1885.

John Burton and his wife Bridget (O’Mahoney) were from Co Tipperary and Co Limerick respectively. According to family lore, they sailed with their two young children aboard the Fernglen and arrived in New Zealand around 1876. Their names don’t appear on any passenger listings or newspaper reports found so far, though the listings for the 1876 sailing may be incomplete.7

My great grandmother Elsie Nunns from West Yorkshire travelled with her parents Sam and Alice (Cockerham) aboard the Delphic, which departed London on 8 May 1902, arriving in Wellington on 27 June. They continued on to Dunedin, disembarking at Port Chalmers.8

My great grandfather Alexander Wright arrived in New Zealand sometime between 1911 (when he deserted from the British Army) and 1914 (when he volunteered for the New Zealand Expeditionary Force). Originally from south east London, he married Elsie Nunns in 1917 after being invalided back to New Zealand during World War I.

Do you know when your ancestors arrived?