At some point during my childhood, while we were staying with my maternal grandparents in Hāwera, I came across my mother’s 1953 Coronation scrapbook.  Maybe my Nanna dragged it out of a cupboard to give me something to do, and keep me out of mischief?  It was probably this event that prompted me to ask my mother if she had attended the coronation, or seen the fancy coach going past.  I don’t recall exactly what she replied, but I do remember thinking in my head afterwards “oh, of course – Mum was living in Hawera, and the coronation would have been in Wellington.”  The concepts of  Overseas and London obviously hadn’t registered in my wee brain.  Elizabeth was Queen of New Zealand so I naturally expected her to be living here. 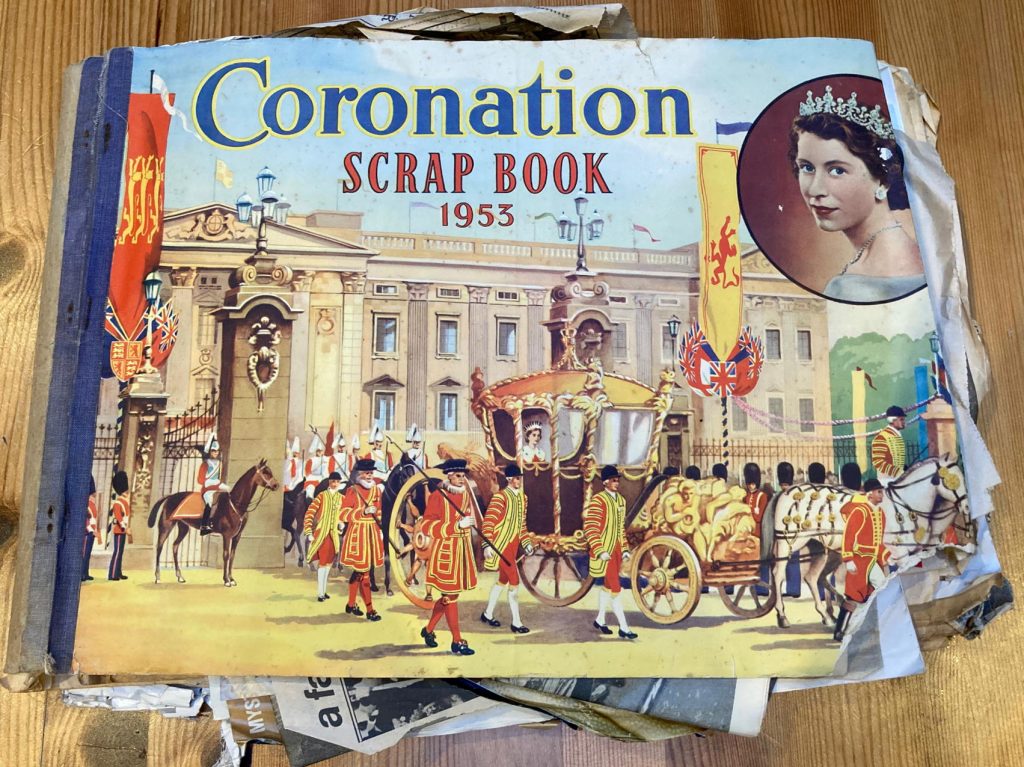 Nothing had been pasted into the pages of the book – it just had a heap of clippings and some full newspapers tucked inside.  Armed with a pair of scissors and a bottle of glue, I cut up lots of the photographs (the colour ones were especially appealing) and gaily pasted them in.

Talking to my mother recently and she said that the scrapbook was probably bought from the local stationery shop.  Her mother Jean was working at the time, running a maternity and babywear shop in Hāwera High Street, and so my mother was indulged a bit because of that and had things bought for her.  Her father George collected newspapers, like The Weekly News and “an Australian paper with cartoons”, and the newspapers with the scrapbook are probably thanks to him. You can see the newspaper below has been folded in half, as has all of them.  Anyone got tips for flattening them? 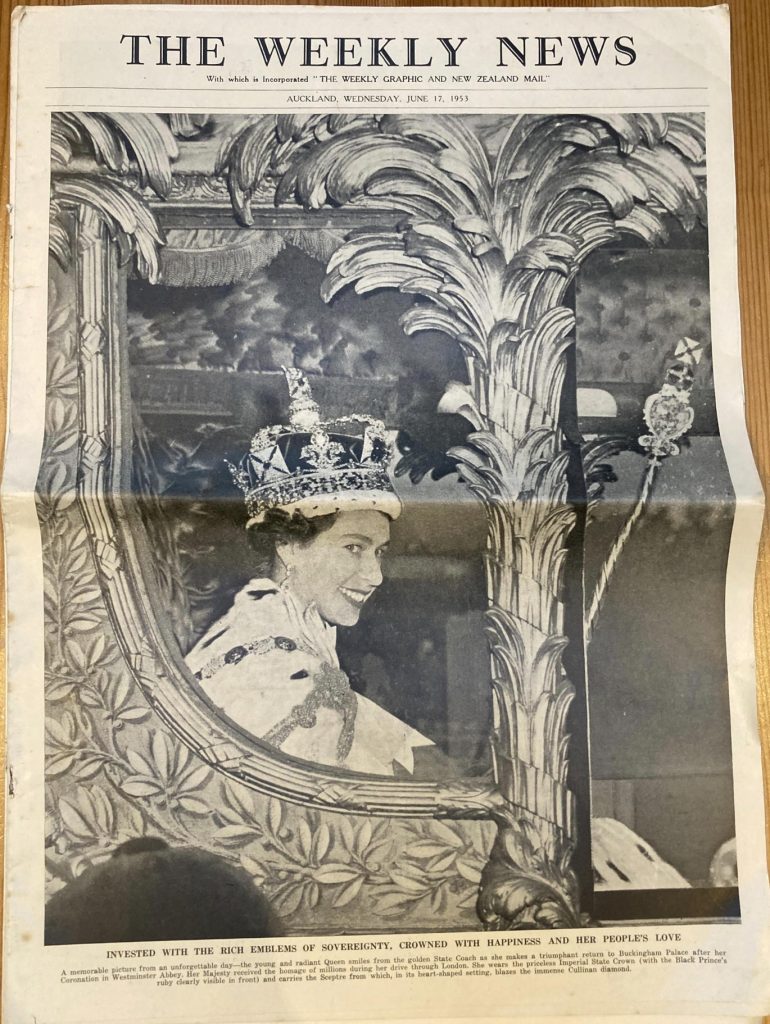 INVESTED WITH THE RICH EMBLEMS OF SOVEREIGNTY, CROWNED WITH HAPPINESS AND HER PEOPLE’S LOVE.
A memorable picture from an unforgettable day – the young and radiant Queen smiles from the golden State Coach as she makes a triumphant return to Buckingham Palace after her Coronation in Westminster Abbey. Her Majesty received the homage of millions during her drive through London. She wears the priceless Imperial State Crown (with the Black Prince’s ruby clearly visible in front) and carries the Sceptre from which, in its heart-shaped setting, blazes the immense Cullinan diamond. – The Weekly News, June 17 1953. 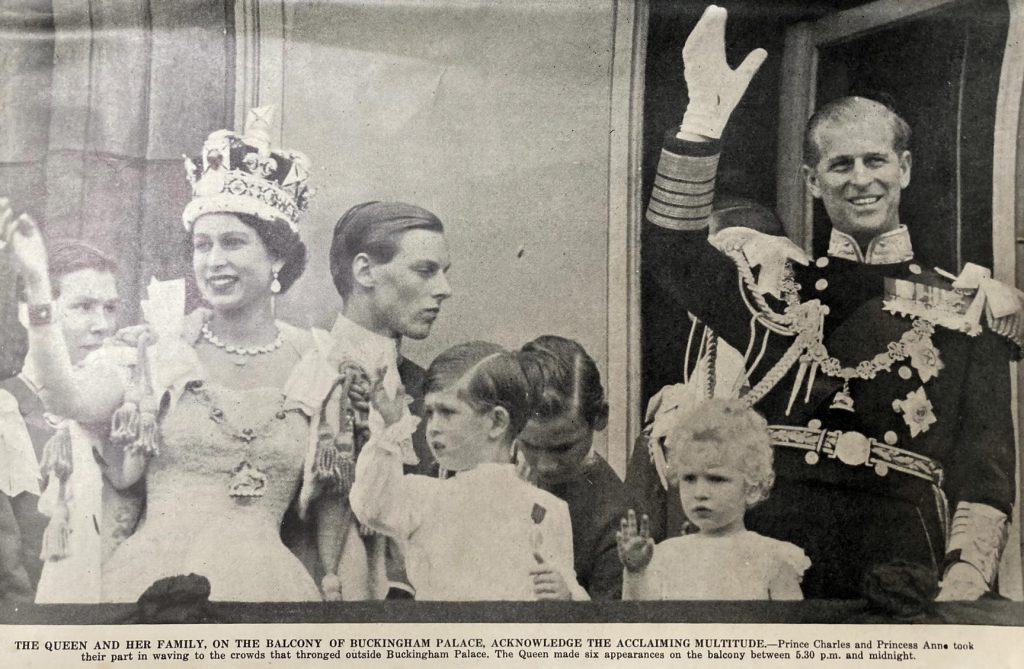 THE QUEEN AND HER FAMILY, ON THE BALCONY OF BUCKINGHAM PALACE, ACKNOWLEDGE THE ACCLAIMING MULTITUDE.
Prince Charles and Princess Anne took their part in waving to the crowns that thronged outside Buckingham Palace. The Queen made six appearances on the balcony between 5.30pm and midnight. – The Weekly News, June 17 1953.

The coronation was celebrated across New Zealand, and my mother recalls the very pro-British sentiment of the time.  She grew up reading stories about the “Little Princesses”, from the book written (unsanctioned) by the former governess of Princesses Elizabeth and Margaret.  (Linda Root wrote an interesting blog post about the book and its author, Marion Crawford.)

There was a parade in the streets of Hāwera to celebrate, with floats from many local organisations, including the school.  My mother was on the school’s float, dressed up as a cleaner (apparently portraying “where you’ll end up without education”).  None of her classmates were keen, but my mum was happy to don a headscarf and brandish a mop and bucket for a ride on the float.  I had a search in Papers Past for mentions of the Hāwera parade but couldn’t find any – but there were plenty from around the country, and Digital NZ has some wonderful photographs of the parade in Feilding.

Other editions of The Weekly News that were saved inside the scrapbook include those published for the coronation of King George VI and Queen Elizabeth in 1937, and the king’s death and funeral in 1952, though they’re suffering from quite a bit of wear and tear. 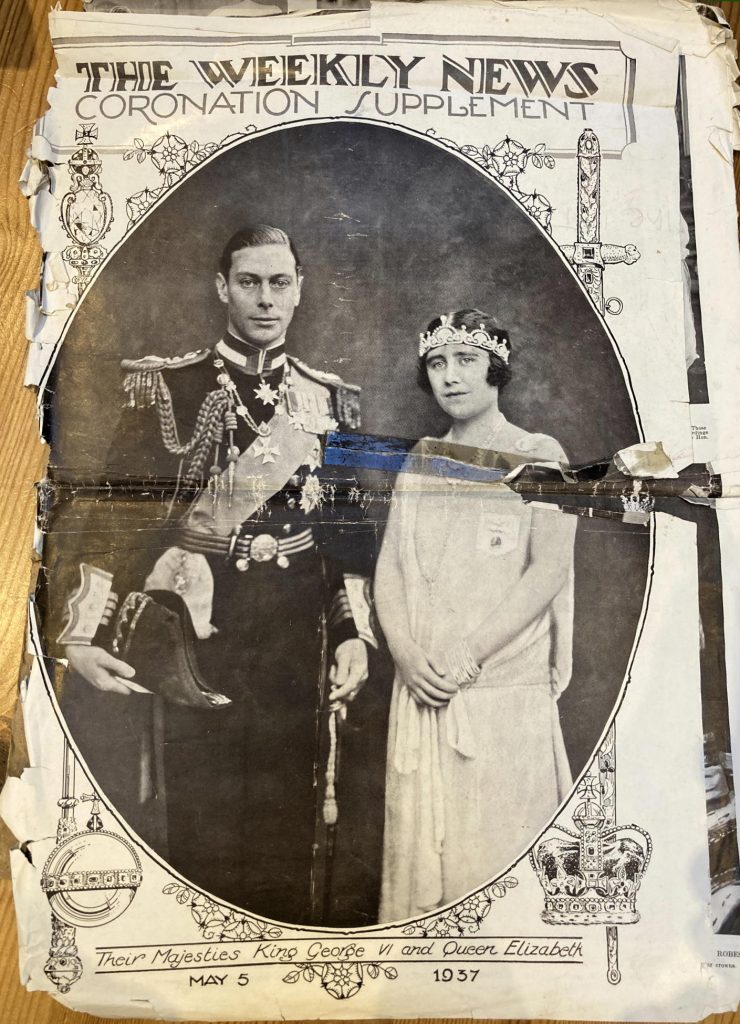 The Weekly News began life in 1861 and then two years later merged with The Weekly Herald to become The Auckland Weekly News.  Published by Wilson and Horton it was originally circulated in rural areas in the North Island, and then across New Zealand. In 1934 the name reverted back to The Weekly News, and from 1965 until the last edition in 1971, it was known as The New Zealand Weekly News.1 According to an advertisement in 1888 in the New Zealand Herald, it purported to be the “Premier Weekly Journal of New Zealand” and covered country news, agricultural subjects including “practical work of the farm”, sports, games, a weekly history of the news of the world, serial tales “of absorbing interest”, and a sermon or “some well selected Sunday reading”.2 It doesn’t appear to have been digitised, except for some images from pictorial supplements which are available through Auckland Libraries’ Kura Heritage Collections Online (though I haven’t found an easy way to find them).

I tried to keep up with the intent of the scrapbook and collected occasional royalty-focussed newspaper supplements and articles, but my interest waned as the amount of media coverage increased.  The last item I intentionally collected was a supplement in celebration of Prince William’s marriage to Catherine Middleton, though it’s stashed away in a box somewhere and not with the scrapbook.

I love this photograph, showing Prince Charles as a typical four-year-old, and reminds me of his grandson Prince Louis over the Jubilee weekend! 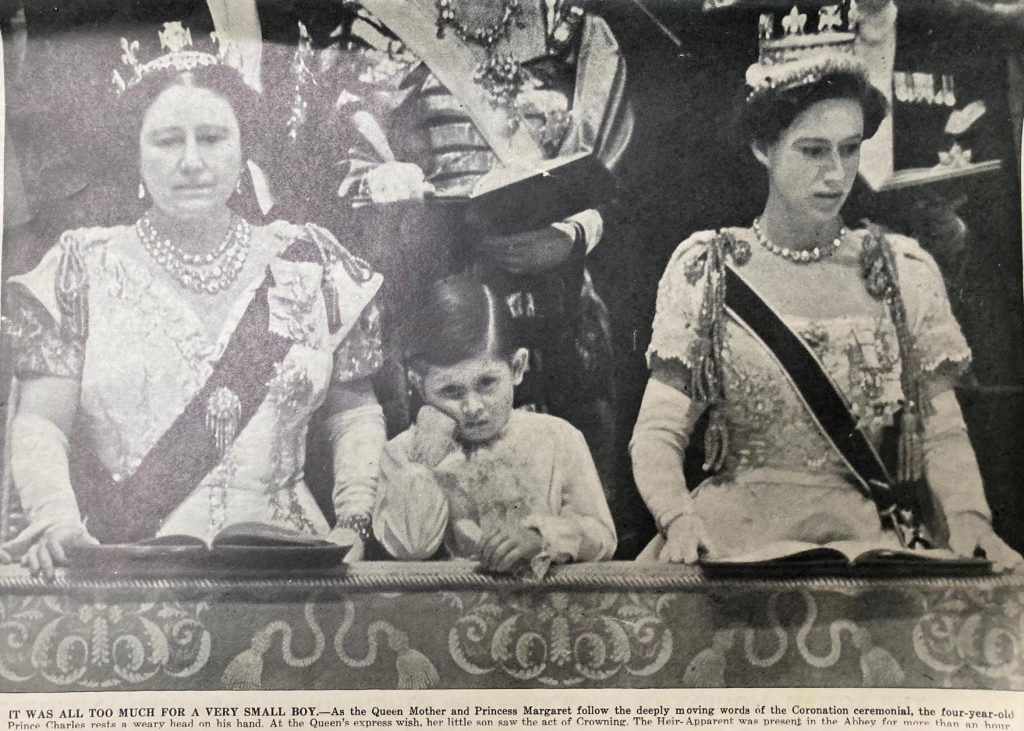 IT WAS ALL TOO MUCH FOR A VERY SMALL BOY.
As the Queen Mother and Princess Margaret follow the deeply moving words of the Coronation ceremonial, the four-year-old Prince Charles rests a weary head on his hand. At the Queen’s express wish, her little son saw the act of Crowning. The Heir-Apparent was present in the Abbey for more than an hour. – Weekly News, 17 June 1953

If you fancy taking a delve into some news from times past, as well as New Zealand’s Papers Past for digitised newspapers and publications, there is Australia’s Trove, and what a treasure trove it is!  And until 6 June (10am BST, 9pm NZST), Findmypast’s entire newspaper collection is available for free.