I’ve written before about my relative (first cousin, thrice removed) Peter Gaffaney, who died during World War I. A couple of years ago I met some members from that side of the family, who very kindly gave me photos of Peter’s war medals and his memorial plaque (commonly referred to as a “Dead Man’s Penny”). So often these items are lost or sold on, and it was wonderful to know that Peter’s had been kept and treasured in the family. 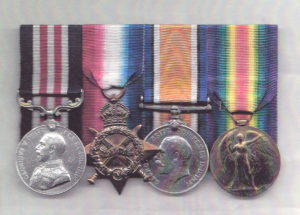 Peter’s service record shows that his medals were issued to his brother Vincent, noted as his legatee. 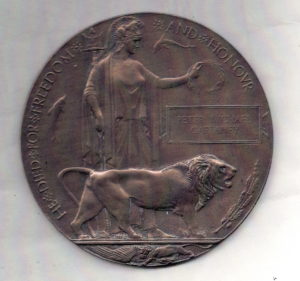 Memorial plaques were issued to the next-of-kin of British and Empire servicemen and women who died as a result of the First World War. They were issued along with a commemorative scroll and letter, though sometimes these were sent separately. Peter’s scroll was sent on 13 June 1921, and his plaque on 16 Feb 1922. 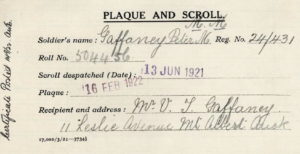