For Acts of Gallantry in the Field ~ Sgt P.M. Gaffaney M.M.

I’m not related to any famous generals or admirals (that I know of!), but I am immensely proud of those servicemen in my family who fought with courage and fortitude in their own way, and I honour one of them this ANZAC Day.

My (first, thrice removed) cousin Peter has appeared in a few posts now on this blog, and no, there was no happy ending for him.  Yet, I wanted to know about his Military Medal, and why it was awarded to him.  No published accounts mention his name or deeds, so I looked to his battalion and its account of the war in its diaries.

On March 9th, 1918, Sgt Peter Gaffaney rejoined the 2nd Battalion of the New Zealand Rifle Brigade (NZRB), after two weeks’ leave in the UK. On that day the battalion had route-marched from Houlle (France) to Watten, and then travelled by rail to Ypres, so that may be where he joined up with them, before marching to Forestor Camp.

After moving to Lankhof Farm camp six days later, the battalion were then moved on to Halifax camp at short notice on March 21st, being fitted out and organised for active operations.

By March 22nd the NZRB had received orders to get ready to move south at three hours’ notice, along with other Brigades in the NZ Divison.

On March 23rd, instructions were issued for the move by rail the following day.

March 24th
Battn route-marched to HOPOUTRE Siding & entrained there at 11.15pm for an unknown destination

March 25th-26th
Detrained at AMIENS at about 1pm 25th and bivouacked in public gardens. All surplus gear was stored and Battalion was equipped in Battle order.

…At midnight Battn proceeded by motor lorries to PONT NOYELLES arriving there at 2am 26th. Started marching forward at 2.30am via FRAUVILLERS BAIZIEUX WARLOY to HEDAUVILLE arriving there 7am after a hard dusty march. The Battn. bivouacked in a paddock in the village & the men enjoyed a hot meal and rest till midday. At 1pm marched on to MAILLY MAILLET at which village orders were received for an attack to be made by the Battn.

A large gap existed in our line at this time extending roughly from HAMEL to PUISIEUX and only two Battns of the Division had arrived – 1st CANTERBURY and 1st Battn N.Z.R.B. These Battns were astride the MAILLY MAILLET-SERRE Road – 1st CANTERBURY on right, 1st N.Z.R.B. on left in line with the windmill at Q.1.d (57.d) At this time certain batteries were evacuating MAILLY MAILLET and situation was obscure – no shelling and no sign of enemy excepting a little m.g.[machine gun] fire and sniping. 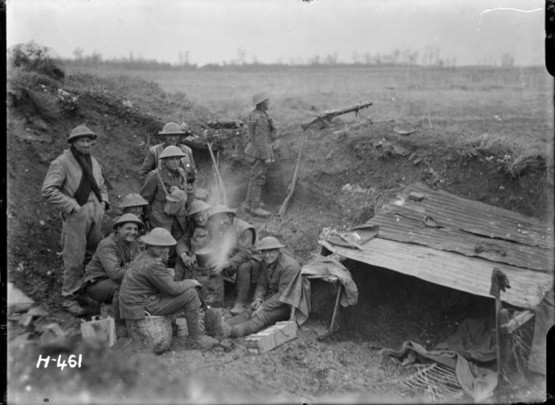 1st AUCKLAND arrived in village about same time and about 13 tanks were reported in neighbourhood of COLINCAMPS. Objective given Battn was SERRE Village north along road SERHEB to K.23. Central. 1st AUCKLAND K.35.a to SERRE Village. Four VICKERS guns were allotted to Battalion and no artillery support beyond the assistance of a 4.5 Battery in the orchard behind windmill. This Battery came into action at 5pm. 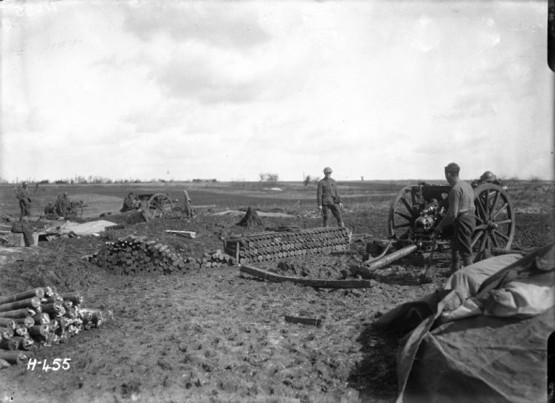 ..The attack was launched from the line of the two Battns holding the SERRE Road at 5.30pm. We advanced on the left of road and 1st AUCKLAND on right – soon to in front. These two lines extended on a two Coy. frontage, balance of two Coys in artillery formation. ‘C’ Coy was on right – ‘D’ Coy on left – and ‘B’ Coy. acting as a left flank guard. All went well until the line of the road Sugar Refinery – EUSTON was reached, when m.g. fire from direction of LA SIGNY Farm and Right flank about One Tree Hill became so heavy that the advance ceased, – also partly because AUCKLAND were not so far forward on the right and the left flank was not in a favourable state for pushing on. 1st AUCKLAND reported being held up at 6.45pm.

At this time a gap existed between ‘D’ and ‘B’ Coys – ‘B’ Coy being refused along the EUSTON – COLINCAMPS Road (APPENDIX – SKETCH ‘A’). In the dusk a connection was made with ‘B’ Coy and line was joined up & ‘B’ Coy flank was left to help defend COLINCAMPS as a report was received stating that parties of the enemy were marching on that place. The enemy had been in HEBUTERNE and COLINCAMPS early in the day but were driven out at 11am by the tanks previously mentioned, but just how far we did not know, nor how far the enemy had crept back when the tanks retired before 3pm.

The Battn. started digging in at 6.45pm. At 7pm 1st AUCKLAND came forward and took up a continuation of our line to the Right. During the latter stages of the attack small parties on Huns using m.gs up to the last minute were met with about EUSTON and K.33.a.33. Three light m.gs and one heavy were captured by us and 37 prisoners taken. ‘B’ Coy took two guns and ‘C’ Coy two guns. 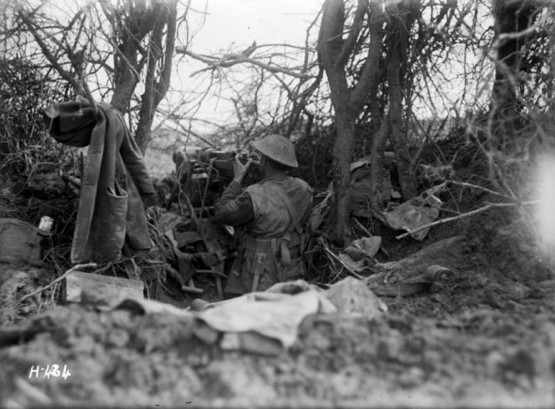 As far as is known 10 enemy were killed and 6 wounded but the advance was too rapid to enable him to get any stretcher cases away. About 20 to 30 enemy retired to this next line – WATERLOO BRIDGE Hedge, but owing to the dark it is hard to state exactly how many.

Our casualties were 9 killed and 35 wounded. All but two were caused by mg. fire – the two by shell fire as the enemy has at this time practically no artillery and it is estimated that he has only two guns on the front which kept firing on the large dump at K.33.a.00,00. For acts of gallantry & good work 3 O/R [Other Ranks] were recommended for decoration. (SEE APPENDIX ‘B’)

March 27th
The night of 26/27 was spent in digging in and was very quiet and at 5am the Battn was relieved successfully by 2nd Bn. AUCKLAND Regiment and returned to support of 1st Brigade at MAILLY MAILLET. 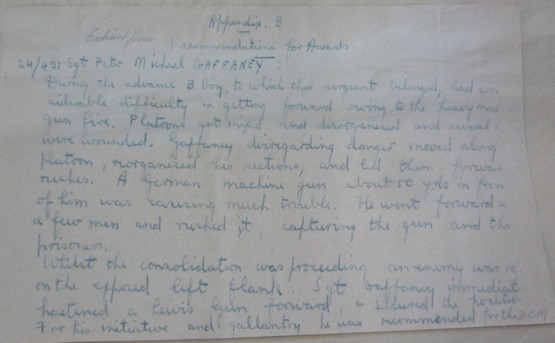 During the advance B Coy, to which this sergeant belonged, had considerable difficulty in getting forward owing to the heavy mac[hine] gun fire. Platoons got mixed and disorganised and several were wounded. Gaffaney disregarding danger moved along platoon, reorganised his sections, and led them forward rushes. A German machine gun about 50 yds in fron[t] of him was causing much trouble. He went forward w[ith] a few men and rushed it, capturing the gun and the prisoners.
Whilst the consolidation was proceeding an enemy was near on the exposed left flank. Sgt Gaffaney immediately hastened a Lewis Gun forward, & secured the position.
For his initiative and gallantry he was recommended for the DCM.

Peter was posthumously awarded the Military Medal for his actions on March 26th, 1918.  He was 24 years old when he died on April 5th, 1918, and is buried at Louvencourt Military Cemetery, Somme, France.

I wonder if any of Peter’s family visited his grave?  Perhaps the brother listed as his next-of-kin, Francis,  a captain in the Wellington Infantry Regiment.  Did he ever see his brother during their time fighting on the other side of the world? How would it feel to have your son, brother, uncle, cousin, buried so far far away? Is there anyone left now to mourn him? 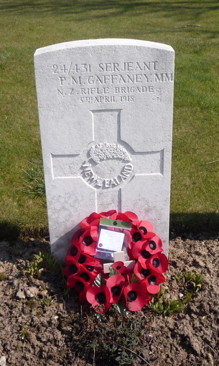 NB. Any errors in transcription or interpretation are all mine.

In celebration of Marriage ~ Wedding Wednesday