It’s fascinating where surnames originated and how they evolved. In April I posted about my 3 x great grandfather, George Tunnecliff. Or was it Tunnecliffe? With an ‘e’, or without? What was the “correct” surname?

My last lot of assignments for IHGS were all centred around surnames, and since we could pick a couple of our own family names to look at, I chose Tunnecliffe as one of them.

Tunnecliffe is actually a variant of the more common TUNNICLIFF(E). Reaney1, Titford2 and Hanks & Hodges3 agree that it is a habitational surname, taken from Tonacliffe in Lancashire, which was recorded in 1246 in the Lancaster Assizes as “Tunwal(e)clif”, from OE tun enclosure, settlement + wœll(a) spring, stream, + clif bank, slope, so ‘enclosure on the banks of a stream’.

As with many other habitational names, the surname has become more common where an inhabitant from that place has moved or travelled away from his immediate area, which helps explain why the surname is more prevalent in a neighbouring county, rather than in the county where the place is actually located. Titford noted the name is mostly found now in Staffordshire, where I have traced back my family back to a Robert TUNNICLIFFE, whose son Edward was buried in 1821 at St Michael’s Rocester with the surname TUNNECLIFF inscribed on his gravestone. This variant spelling continued with all of Edward’s descendants researched so far, though in modern usage an E was  usually tacked on to the end.

For our assignment, we were asked to look at death registrations in England & Wales from July 1837 to December 1851 and plot the surname’s distribution. When searching FreeBMD, I wanted to look for all instances of TUNNICLIFF(E) and DUNNICLIFF(E), including any variant and deviant spellings. To cover as many alternate spellings as possible within the confines of FreeBMD’s limits, I used the search strings: tu*n*cl*f* and du*n*cl*f. I also searched using different first vowels to pick up any stray entries, and found only one (TENNECLIFF).

The variants and deviants found are listed in the table below. The dominant variants are clear to see, although it is obvious that the DUNNICLIFF(E) variant is far less common than TUNNICLIFF(E).

So where are all these Tunnicliffes and Dunnicliffes? From the death registration data, I mapped their distribution across England and Wales:

As to be expected, the surname is mostly found in Staffordshire, and surrounding counties. Internal migration for work may have resulted in the instances found further south. Indeed, most of those counties are connected to the coast, which could suggest maritime or trading occupations.

I also wanted to look at whether there was a regional difference in the distribution of TUNNICLIFF(E) compared to DUNNICLIFF(E). Was there one point of origin for this variant, and would it be apparent from mid-19th century records? 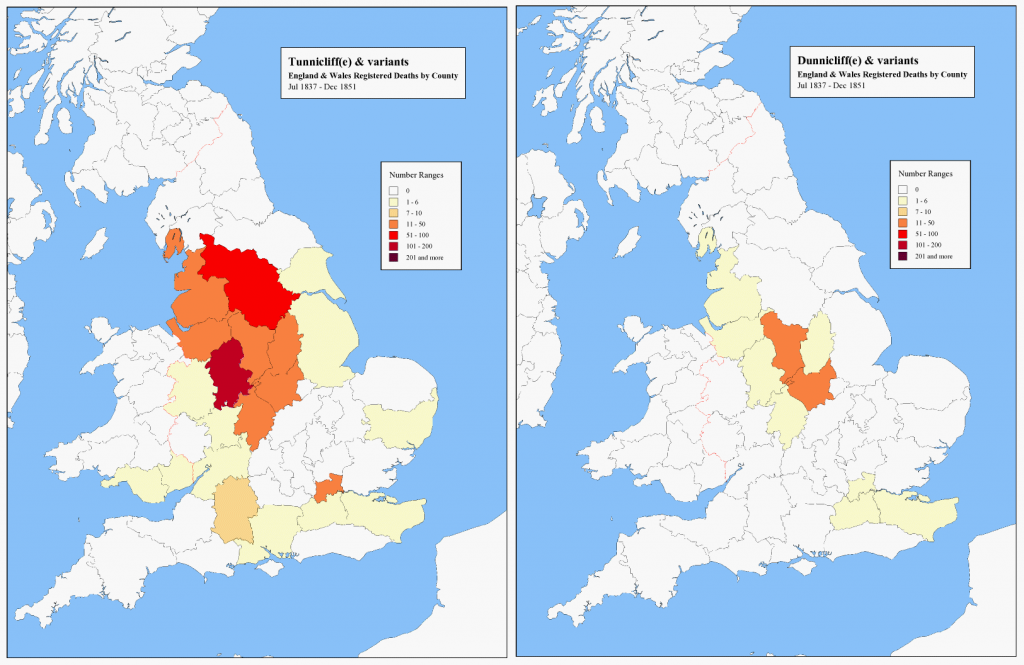 The Dunnicliff(e) variant was more concentrated in Derbyshire and Leicestershire. Perhaps this was where the variant originated? However, it does appear in the South East as well, perhaps from an earlier migration of a TUNNICLIFFE family where the spelling changed, or a DUNNICLIFFE family moving recently south.

Edward Tunnecliff’s great grandson George emigrated to New Zealand in 1857 and brought with him the TUNNECLIFF(E) variant, which has now unfortunately died out there. It currently only found in very small numbers in the United Kingdom and the United States4.