Edward George Tunnecliff ~ an ANZAC all the same

Edward Tunnecliff (my first cousin thrice removed) was born in New Plymouth on 9th May 1886, the eldest son of George Tunnecliff (Jnr) and Alice Kine. He was living in Dover Road, Okato, with his brother Leonard, and farming land in Tataraimaka, when he was conscripted into the New Zealand Expeditionary Force Reserve in 1916. This First Division was made up of men between the ages of 20 and 45, who were British subjects, and either unmarried, or with no dependent children.

On his attestation on 18th September 1916, Edward was 30 years and 3 months old, 5 feet 7 1/2 inches in height, and weighing 158 pounds. He had a fair complexion, blue eyes, and brown hair mixed with grey. He was passed as fit, and a note made that his teeth “requires attention”.

He was posted to the New Zealand Rifle Brigade, B Company, for training at Trentham Military Camp. Within 26 days he was dead. 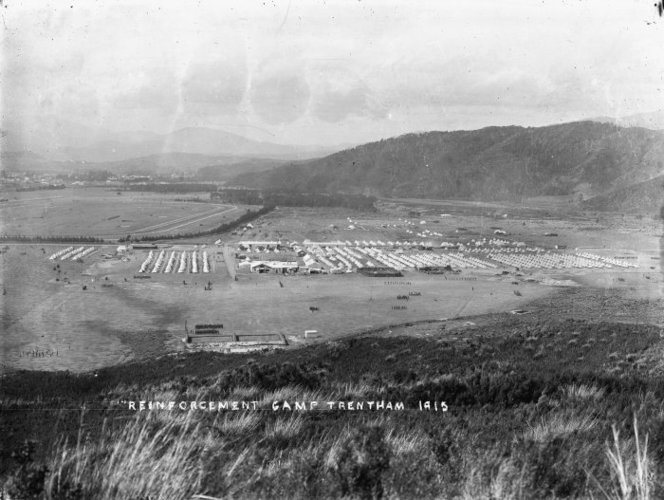 Trentham Camp, near Wellington, was built to house and train two thousand soldiers for World War 1. Eventual numbers reached more than 7000, and the damp, crowded accommodation saw a growing number of soliders struck down with respiratory ailments. The first few cases of measles in November 1914, escalated into an epidemic, with the camp registering over a thousand cases by the middle of 1915.

Wellington Hospital filled up with infected soldiers, and a nearby old fever hospital was taken over. Soon, this too was overflowing, and some kind of accommodation was required for those soldiers not quite sick enough for hospital, but still requiring a period of isolation before rejoining their unit. A residential home close to Trentham was offered by its owner Mr C.J. Izard for accommodating up to 25 soldiers1. After a storm demolished one of the camp’s “measles marquees”, Messrs Levin and Co. offered a large three-storied store at Kaiwarra, free of charge to the Health Department, for hospital purposes2.

Provision has been made at Kaiwarra for the recreation of the convalescents, and, as announced elsewhere, a billiard table has already been given them, but people anxious to make the isolation of the soldiers less tedious can yet find scope for their generosity. All kinds of games, such as deck-quoits, also books and magazines, will be received with gratitude.
Evening Post, 17 Jun 1915, “MEASLES EPIDEMIC”3

The general public rallied to help support the sick soldiers. Around the country, the newspapers were filled with articles and letters to the editors decrying the appalling conditions at Trentham. 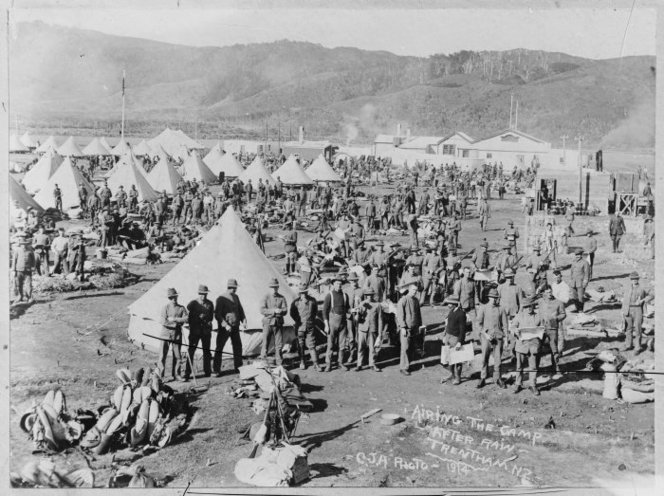 Sir, – I feel it is my duty to let the people of Auckland know the condition of the soliders at Trentham as regards medical situation. The outside public know nothing of how the medical portion of this camp is mismanaged and neglected. There are at the present time over 600 cases in the hospital at Wellington, mostly measles or serious chest and lung complaints. The accommodation there is shockingly inadequate. Measles are sweeping through these long huts with great rapidity. The following is the monotonous routine:- A man feels ill and his chest is one mass of measles. The orderly corporal takes him, together with 10 to 12 others, down to the medical tent at 8.15am. Outside this small marquee the whole of the sick men from all the camp must wait. No matter what the weather is, no matter how ill they are, there they must stand, in mud often over their boot-tops, until their turn comes to see the doctor. I have myself seen men waiting thus in pouring rain for two whole hours. Worse than this, I have seen them faint with sheer exhaustion at such a trying ordeal. The invariable remedy, no matter what the complaint, is two pills, plus “excused from duties for the rest of the day,” or in the case of measles they are hurriedly rushed off to a hospital in Wellington. There they remain for three or four days until the infectious stage is over, and back to camp they are bundled again, weak and ill – to hang about on “light duties for a week.”
Yesterday (Friday, June 26) 650 men “reported sick” and some of them had to stand outside in the rain from 8.15am until after 11am. On Wednesday there was no doctor in attendance at all, and after a two hours’ wait the unfortunate men were forced to return. Three men died of measles last week, and there will be many more ere the winters is out unless the medical side of so large a camp is properly managed. In every tent and hut sick men are lying – some in high fevers, and all with wet coats and clothes hanging around, and some with wet clothes actually on their sick bodies. They report sick and are sent back again. The hospitals in Wellington are taxed to the utmost, and can take no more. The people of New Zealand, as long ago as last February, subscribed a more than generous amount for a permanent base hospital here in camp. Although the matter is of much urgency, and all these months have gone by, we are absolutely without a hospital except two ordinary sized marquees, holding not more than 20 beds. The public will be told that their hospital is “in course of erection.” It is, and in another two or, perhaps, three years it will be ready. Meanwhile we are pegging along in the utmost discomfiture, and God help the unfortunate who get ill! The camp authorities certainly will not.
A TRENTHAM SOLIDER.
New Zealand Herald, 29 June 1915 “LETTERS TO THE EDITOR”4

Eventually, after a visit to the camp from Prime Minister William Massey, the decision was made to relocate the majority of the soldiers in July 1915, and additional training camps were established at Waikanae and Palmerston North. Around 1300 soldiers stayed at Trentham.

The Report of the Trentham Camp Commission5 tabled in the House of Representatives on 27th August 1915, found that several causes had contributed to the spread of sickness:

Due care and efficient measures were not always taken to prevent or minimise sickness or mortality, and there was no efficient system for the treatment of the sick, and no hospital accommmodation at the camp.

Testimony was given “as to the uncomplaining patience with which the sick men and the men generally faced the conditions arising not only from their ailments but from the inclement weather and the discomforts that ensued“.6

Later newspaper reports expounded the new measures that were being implemented, including the provision of a permanent camp hospital, to ensure the health of soldiers at Trentham. Unfortunately, cases of measles continued to appear, though the peak of the epidemic had passed. The following year, Edward Tunnecliff began his training at Trentham on 19th September. Just eight days later, he was admitted to the camp hospital, where he died on 14th October at 11pm. The cause of death was measles.

I’m not sure what would be worse for a parent – knowing your child had died needlessly in a local military hospital, and having to bury him less than a month after he’d left home; or knowing he’d died violently, in a battle on foreign soil, with possibly no known grave.

Edward takes his place on the New Zealand Honour Roll, along with 504 others who died while in training. He is buried at Te Henui cemetery, New Plymouth, alongside his parents. 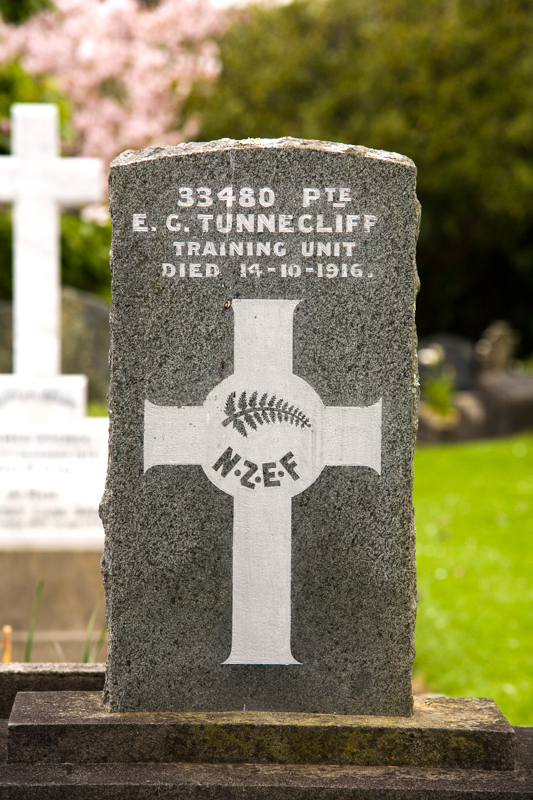 At the going down of the sun and in the morning
We will remember them.

This post is my contribution to the 2014 Trans-Tasman ANZAC Day Blog Challenge.