Oh my word, it has been a long while since I’ve posted.  I have been busy with IHGS assignments, lots of family history research, and correspondence with distant cousins – hence this blog has been somewhat neglected.

Thanks to a fellow IHGS student, I now have a copy of my great great grandmother’s obituary from the New Zealand Tablet, and as I’ve lately been in contact with a few O’Rourke cousins, I thought it timely to share. 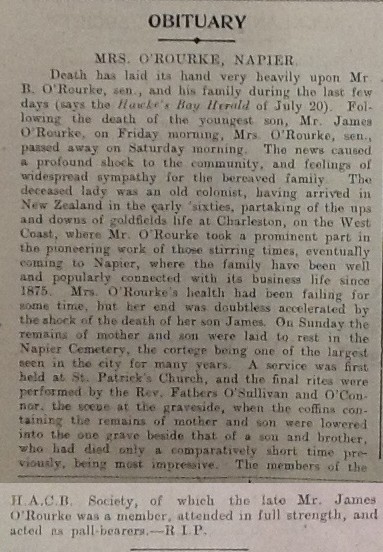 Death has laid its hand very heavily upon Mr
B. O’Rourke, sen., and his family during the last few
days (says the Hawke’s Bay Herald of July 20).  Fol-
lowing the death of the youngest son, Mr. James
O’Rourke, on Friday morning, Mrs O’Rourke, sen.,
passed away on Saturday morning.  The news caused
a profound shock to the community, and feelings of
widespread sympathy for the bereaved family.  The
deceased lady was an old colonist, having arrived in
New Zealand in the early ‘sixties, partaking of the ups
and downs of goldfields life at Charleston, on the West
Coast, where Mr. O’Rourke took a prominent part in
the pioneering work of those stirring times, eventually
coming to Napier, where the family have been well
and popularly connected with its business life since
1875.  Mrs. O’Rourke’s health had been failing for
some time, but her end was doubtless accelerated by
the shock of the death of her son James.  On Sunday the
remains of mother and son were laid to rest in the
Napier Cemetery, the cortege being one of the largest
seen in the city for many years.  A service was first
held at St. Patrick’s Church, and the final rites were
performed by the Rev. Fathers O’Sullivan and O’Con-
nor, the scene at the graveside, when the coffins con-
taining the remains of mother and son were lowered
into the one grave beside that of a son and brother,
who had died only a comparatively short time pre-
viously, being most impressive.  The members of the
H. A. C. B. Society, of which the late Mr. James
O’Rourke was a member, attended in full strength, and
acted as pall-bearers. – R.I.P.

Bridget O’Rourke died on 18 July 1914 in Napier, New Zealand, and is buried at the Old Napier Cemetery in the O’Rourke family plot.  Her cause of death was given as “Pneumonia, Syncope”.