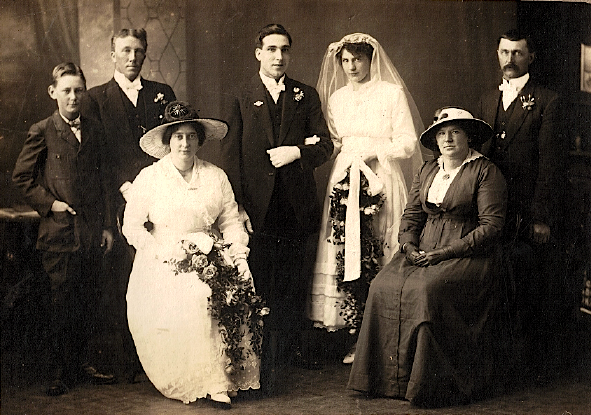 A returned soldier’s wedding took place at Holy Trinity Church yesterday afternoon, when Corporal Alex Wright, of Gisborne, was married to Miss Elsie Nunns, eldest daughter of Mr S. Nunns, of Gisborne.  The bride, who was given away by her father, wore a becoming frock of crepe de chine, with the customary veil and wreath of orange blossoms and carried a shower bouquet.  Miss Violet Nicholson, who wore an embroidered voile dress and black velvet hat, and also carried a shower bouquet, was bridesmaid, and Mr J. Burgess attended the bridegroom as best man.  The ceremony was performed by the Ven. Archdeacon H. Packe, who afterwards played the wedding march.  Subsequently the bridal party repaired to the Trocadero tea rooms, where the wedding breakfast was partaken of.  On their arrival there they were greeted by the Poverty Bay orchestra, with appropriate music.  Amongst the many beautiful presents received was a handsome three-tier cake from Mr and Mrs Findlay.  The usual toasts were proposed and congratulatory speeches were made and the happy couple departed amidst showers of good wishes.

Alexander and Elsie are my great grandparents, and married on 7 June 1917 in Gisborne, New Zealand.

The Nunns from Yorkshire