Some of the photographs Lavinia sent her brother Alexander (my great grandfather) were ones taken in Bermuda.  What on earth was she doing there?  When I went searching two years ago, I’m sure I found her and her family in an outgoing passenger list from England on Ancestry – did I get a copy?  It appears not.  And can I find the list now?  No, I can not.  I wonder if I just imagined it?

However, last year at WDYTYA? Live in London, I snaffled a spot on the Ancestry stand and had fifteen minutes free access to their records, and discovered the family in an incoming passenger list, returning from Bermuda to England.

What were they doing in Bermuda?  What could have brought them out there? And why did they return?

Searching again on Ancestry today, I found another record – a Declaration of Passenger to Canada (Form 30A) from William John Luxton.2 He sailed from England on 26 June 1921 on the S.S. Minnedosa, “On passage to Bermuda”.  He declared that he was 38, married, and that his wife was not travelling with him.  His occupation is “Storehouseman”, the same as in the 1911 census.  Further down the form it asks:

12. By whom was your passage paid? H.B.M Admiralty

So, that answers a couple of questions at least.  I wonder if Lavinia and the children followed on their own later, or if he travelled back to bring them over?  Lavinia is listed as his nearest relative “in country from which [he] came”, living at 48 All?? Road, Deptford, London SE8.

She must have travelled over fairly soon afterwards, as she sent her brother Alex photographs of herself, and her daughters, taken in 1922. 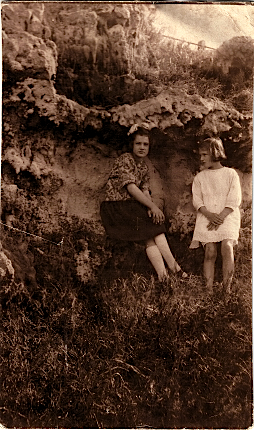 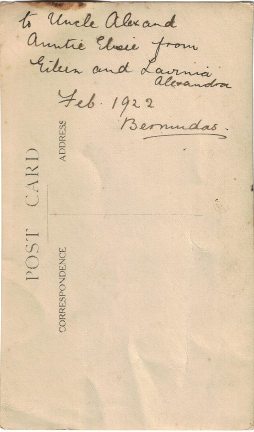 Still, how did William get a job in Bermuda? He was working for the Admiralty in 1911, so maybe it was a job transfer?

The British naval base at the western end of Bermuda was constructed as a direct result of the independence of the English American colonies in 1783, when the British were left without a base between Halifax and the West Indies. The British soon identified Bermuda as a strategic mid-Atlantic location where a secure anchorage for the Navy’s fleet and a dockyard, victualling yard and ordnance depot to maintain the ships could be developed.

In 1795 a base was commissioned in the island’s east end at St. George’s, but it soon proved inadequate and the area known as Ireland Island in the west end was purchased by the Navy for the major naval base. Construction of the North America and West Indies Station, as the base eventually became known, began in 1809 and continued into the early 20th Century. Construction of the Dockyard–including its breakwaters, fortifications, storehouses, workshops, and barracks–was a monumental effort that involved large land reclamations and the labour of thousands of convicts from Britain.

And what exactly was the Victualling Yard? From Blair Howard’s Adventure Guide Bermuda:

The Victualling Yard was the heart of naval operations within the Dockyard. It was here that food and supplies were prepared and stored. The yard is surrounded by a high, stone wall to keep supplies safe from pilferage. Today, it has become a park within a park. Where once hundreds of British seamen ran back and forth across the stone-flagged yard there are now trimmed lawns and benches surrounded by the ruins of massive stone warehouses.

According to The Companion to British history by Charles Arnold-Baker, a naval yard was established in Deptford around 1490. But later “as the navy had increasingly to adopt a world role.. Deptford became a victualling yard..” So, seems to make sense that he may have worked at the Deptford yard, become well-regarded, and grabbed an opportunity to work in Bermuda.

I came across a research guide to military  records regarding the Naval Dockyards held at the National Archives, but all seem to be for much earlier time periods.  Will have to keep my eyes peeled for later records, to see if I can discover anything more about the family’s time out there.

And here’s Aunt Lavinia again, bless her heart (and her photo captions!): 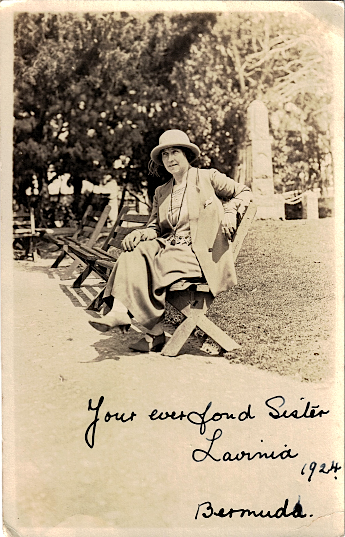