Handed down to my mother from her Aunt Audrey were a collection of photographs and postcards that had belonged to Audrey’s father, Alexander Wright, my mother’s grandfather.  My mother and I didn’t know who most of the people were in the photos, but Alexander’s sister (and my great great aunt) Lavinia and her green pen helped me solve several mysteries!  She wrote on the back of many of the photographs, often with a distinctive green pen, so even the ones that she hadn’t signed with her name, it was clear who the writer was.  And she obviously had corresponded regularly with my great grandfather as the postcards are mostly from her.

Yesterday I posted a photograph from Lavinia, presumably sent to Alexander.  Doing a quick Google search, I found a reference to an old poster appealing for help on “France’s Day” – the date of the appeal was July 14, 1915.  So now I have an approximate date for my photo!

I’m not sure who the two boys are with her – one is most probably Percy, Lavinia’s son (and Alexander’s nephew), who would have been around eleven.

Lavinia Ellen Wright was born around 1883.  I’ve been unable to find her birth registration in the GRO indexes on FreeBMD, though there is a likely candidate registered in the September quarter in Greenwich that year, but with the name Lottie Elizabeth Wright.

In 1891 Lavinia is living with her parents and siblings in Deptford, London, and then seems to disappear for the 1901 census.  However, in 1902 she marries William John Luxton1, and by the time the 1911 census rolls round, she’s at 42 Ravensbourne Road in Forest Hill living with husband William, their son Percy (7) and daughter  Eileen (1)2.

(The census data has been mis-transcribed on findmypast – Lavinia is listed as ‘son’ of William with a birth date of 1904, so I couldn’t find her initially until I searched on her husband’s name.  Her son Percy doesn’t appear in the transcription.  It’s obvious the two lines of data – Lavinia’s and Percy’s – have been combined into one entry, and I’ve notified findmypast.) 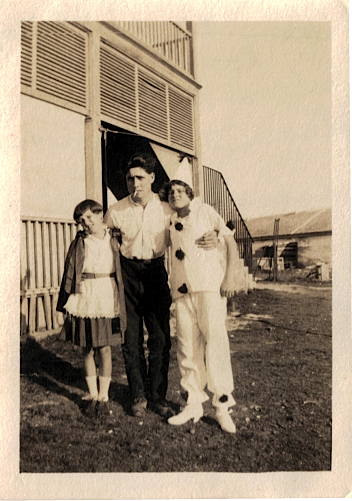 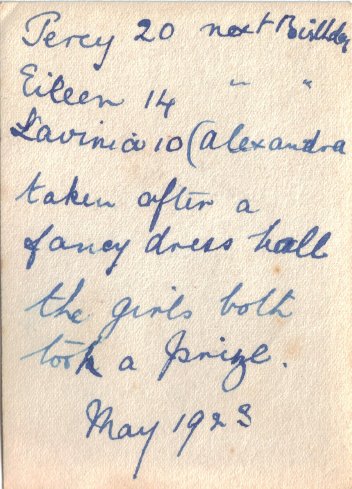 I love this woman! If only all our family photographs had been captioned in this way.  Many thanks to my dear aunt.