I tagged a visit to Ypres onto a weekend trip to see friends in Belgium. Having never been, I was keen to see the area where my cousin Peter (first, thrice removed) had fought during World War I and find out a bit about life on the Western Front.

After leaving Brussels at midday on Easter Sunday, our first stop was at the Memorial Museum Passchendaele 1917.  It was here I was hoping to learn more about the New Zealand Division’s role in the area, and in that respect I was a little disappointed.  To be fair, our journey through the exhibits was at the speed of a four year old’s attention span, so I couldn’t stop and linger,  but I didn’t see a huge amount about the Kiwi involvement.  I guess, (as my husband pointed out), the New Zealanders were a very small number compared to other nationalities, even though the battles here at Passchendaele included the “blackest day” in NZ history. 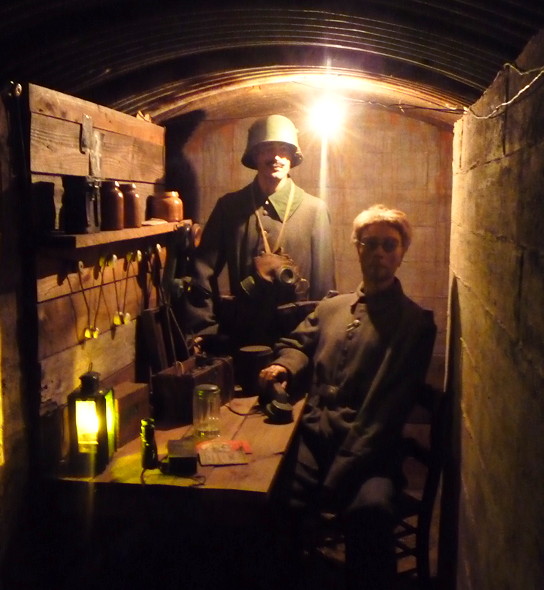 On the lower floor of the museum is a replica dugout and tunnel system with (a bit scary for the kids) sound effects – I found this section fascinating (and please excuse the dodgy photography). 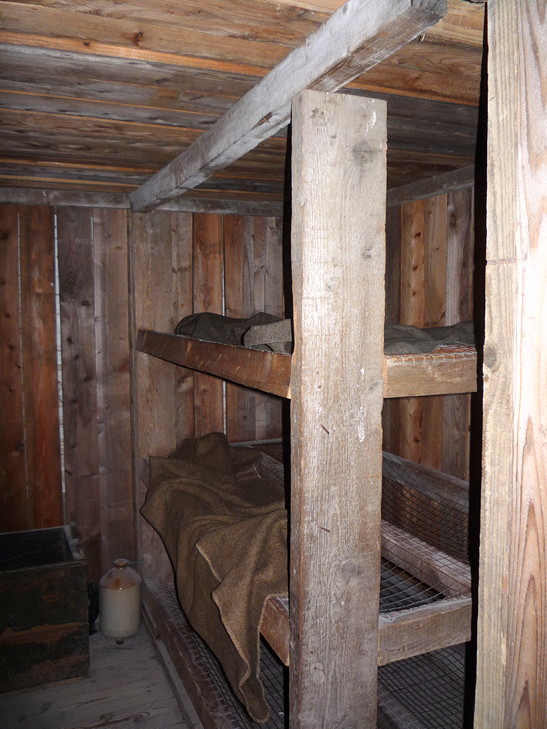 The small bookshop was a surprise – a great array of books available on a New Zealand theme and I had to stop myself from grabbing the lot!  I restrained myself to just one:  Massacre at Passchendaele: The New Zealand Story by Glyn Harper.   The other thing I bought was a Zonnebeke trench map (28 N.E. 1, Edition 7. A Scale 1: 10,000), in the hopes that it would be useful as a guide while reading historical accounts of the battles in the area. Plus, I love maps.

Outside the museum it looks like some construction work is underway, and I wonder if it is part of the outside trench replica that I’d read about, which will be completed for the 2014 commemorations.  If you’re bringing kids, it might be an idea to pick up food/snacks on your way, as the onsite eating options are limited and a bit pricey. Our kids, fueled by a breakfast of chocolate Easter eggs, turned up their noses at the gloriously green gloop offered at the bar (a very tasty chervil soup, though it sounded like the waitress called it “gerbil soup” which worried me initially – I had to check that it was  “vegetarian”) and consoled themselves with freshly baked bread.

Before we headed to Ypres, we managed to find the New Zealand memorial at ‘s Gravenstafel, just outside Zonnebeke, which commemorated the Kiwi involvement in the Battle of Broodseinde on October 4th, 1917. 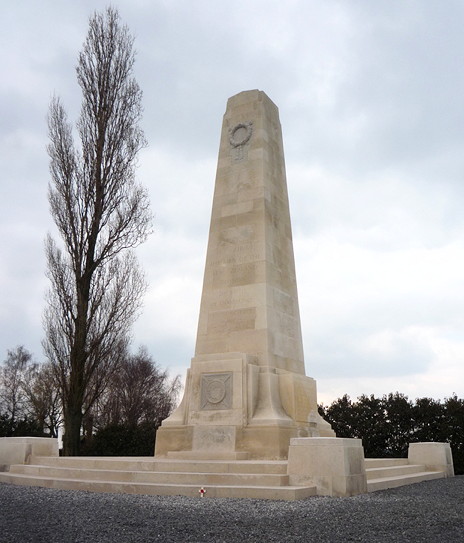 “From the Uttermost Ends of the Earth”

My daughter placed a small remembrance cross at the foot of the memorial.

There were many other places I wanted to stop at, including Tyne Cot cemetery, but unfortunately rumbling young tummies forced us on to Ypres.

Our hotel for the night was located on Grote Markt in the centre of town,  and after filling up on dinner and waffles (not necessarily in that order), we walked to the Menin Gate for 8pm to hear the Last Post.  Completed in 1927, the Menin Gate Memorial to the Missing is dedicated to the British and Commonwealth soldiers who were killed in the Ypres Salient of World War I and who have no known graves.  Nearly 55,000 names are inscribed on the memorial, and if a soldier’s remains are found and identifed, his name is removed.  Except during the German occupation of the town in World War II, the Last Post has been played every night at the Menin Gate since 1928, as an expression of gratitude by the people of Ypres to all those who gave their lives for Belgium’s freedom.

It was a cold but beautiful clear night, and the trumpet sound filled the air and lingered over us.  Gets me every time I hear it.  (I had to turn around and ‘shhh’ at a man talking through it  – even my kids were quiet, so not sure why he needed to be yapping on!)   A special wreath-laying took place afterwards, accompanied by bagpipes.  I didn’t recognise the first piece that was played, but the second was ‘Amazing Grace’. Again, very moving. 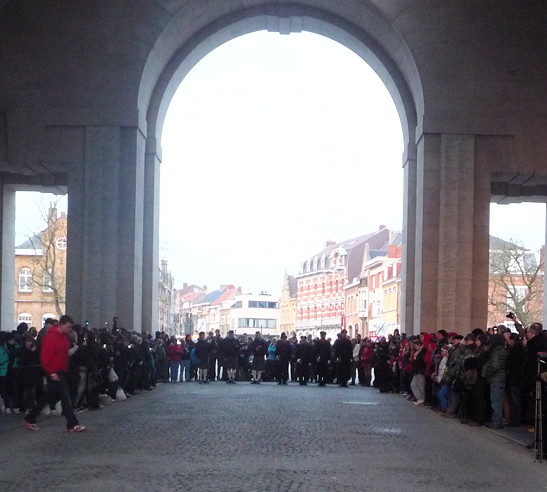 The next morning my 8 year old son and I took off to see In Flanders Fields museum, a few minutes walk from the hotel.  It’s an amazing place, telling many personal stories in an audiovisual way that both of us enjoyed. (I don’t think my 6 and 4 year olds would have liked it as much, however.) We climbed the bell tower  and braved the freezing wind to take in the views over Ypres and beyond.  There are further developments at the museum planned in time for next year’s commemorations. 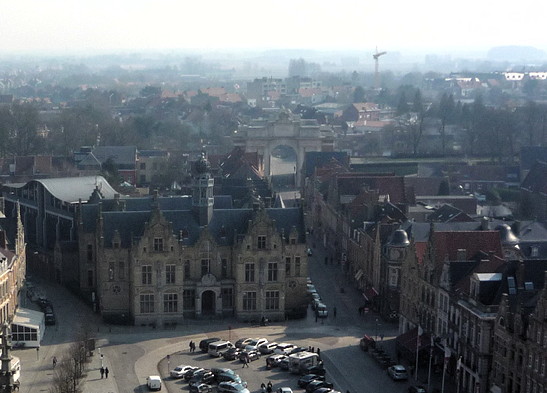 Before we left Ypres, I visited Menin Gate again to view some of the names there of the missing, but didn’t find any New Zealanders.  Later, I found out that the names of the NZ missing are listed elsewhere. Doh!

There are so many sites to visit and we had so little time, but our quick look has made me excited to read up more and then visit again. Soon!

In Remembrance on this Day ~ Arohanui, Peter