Last weekend I attended the Who Do You Think You Are? Live exhibition held at the Olympia in London.  It runs for three days, and I went along for the Friday and Saturday.

What struck me on Friday was how CRAZY busy it was in comparison to last year.  I like going on the Friday, because I have this idea it’s a “quiet” day.   Not so!  I  also filled up my time with four talks and the Keynote lecture with Q & A, so by the end of the day I was feeling rather overwhelmed. 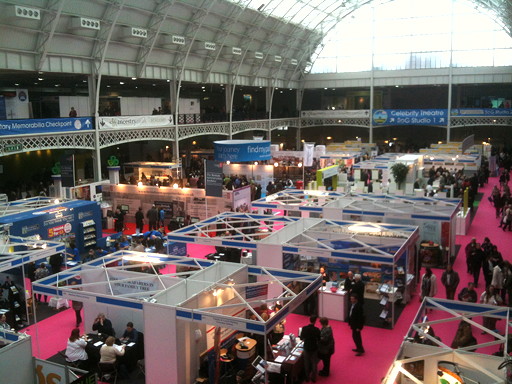 It doesn’t look that busy in this photo, but it was!

The most illuminating presentation I attended was Debbie Kennett’s “A Beginner’s Guide to DNA”.  A fellow IHGS student and I raced into the Olympia to get seats for her 11am session, and were not disappointed.  Debbie gave a clear and concise overview of the three main tests you can take : Y-DNA (males only), mtDNA and Autosomal, and explained how they can be used for genealogical connections.  I found it completely fascinating and now want to get everyone in my extended family tested!

In my Ask the Experts session I scored Dominic Johnson as my expert, and wished I had brought along my palaeography assignments instead of a question about my South African ancestor! Last year I had been inspired by her workshop on palaeography.

In the few spare minutes I had between talks, I managed to get my hands on a Flip Pal mobile scanner and find out all about it, with plans to buy the next day.  I also purchased four books on my ‘Want to Buy’ list (hurray for show specials!):

One of the best parts of the day was chatting to the staff from IHGS, and catching up over dinner with fellow students.

Who Do You Think You Are? Live : Day Two