My 3 x great grandfather, Henry Nunns, was a coal miner, and his father and brothers worked in the mines as well. One of the highlights of my recent Yorkshire trip was visiting the National Coal Mining Museum near Wakefield, to find out what Henry’s working life might have been like.  If your ancestors had any connection with coal mining, this is a fantastic place to visit.  What’s more, it’s free!

I’d recently watched a documentary on child labour, The Children Who Built Victorian Britain, so I had a small idea of what coal mining was about, but I really wanted to find out more – and especially, to go down a coal mine.

Get kitted out with your miner’s helmet and battery lamp then step into the cage and descend 140m underground to discover the amazing sotry of mining through the ages.  Led by ex-miners, these hugely popular tours will give you a vivid insight into the dangers and hardships faced by the men, women and children who toiled deep below the ground.
– National Coal Mining Museum brochure

Now, I’m quite claustrophobic, and I was very nervous about going underground, so I managed to convince my seven year old son to go with me.  (I bribed him with the carrot of getting an awesome ‘Extreme Reading’ photo opportunity for a school competition when we were down in the mine.  Unfortunately, I hadn’t realised that cameras and phones were banned.  Ummm, sorry kid!)  I checked beforehand to see if there were any parts of the tour that involved crawling and the like, and I was assured that any crawling bits were optional and “for the kids”.   In any event, I was fine, and the tour was fantastic!  We were first shown an area of the pit from the 1820s, and then were slowly taken down all manner of tunnels and ‘roadways’.  Our guide, an ex-miner, gave an illuminating picture of what life was like for miners over the last two centuries.

The tour takes 90 minutes, and thankfully there was enough above ground to keep my hubby and the two younger kids amused while #1 son and I took the tour.  (Children under five aren’t permitted on the tour.)  It’s a good idea to wear decent walking shoes, and a jacket or jumper, as it gets a little chilly underground. 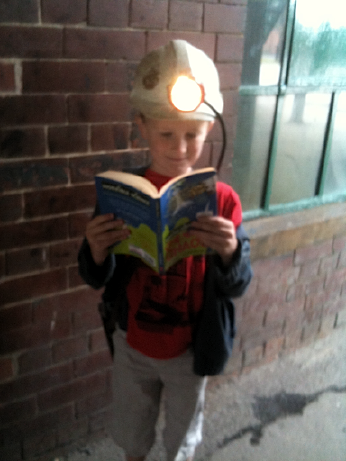 Young miner, not so extreme reader

Unfortunately I didn’t get much time to check out everything above ground, but there are historic colliery buildings, collections detailing mining history, displays of mining memorabilia, a library, nature trail, retired pit ponies, plus a shop, small children’s indoor playroom, cafe and picnic area.

I did get to buy a book which our guide had recommended, and to which I also give a big thumbs up – Victoria’s Children of the Dark by Alan Gallop.  It tells the story of the children who worked in the mines in the early 19th century, and recreates the events surrounding the 1838 Husker Pit disaster at Silkstone, Yorkshire.  Definitely a fascinating read after being down a mine and seeing the actual working conditions.