Last week I posted this photograph of my great grandparents, Elsie Nunns and Alexander Wright.  Except when I sent the photo to my mother to see if she knew who the baby was, she replied saying “that’s definitely not Elsie in the photo”.  (Umm, Mum, I’ve just posted it on my blog and said it’s Elsie – don’t tell me it isn’t so!) 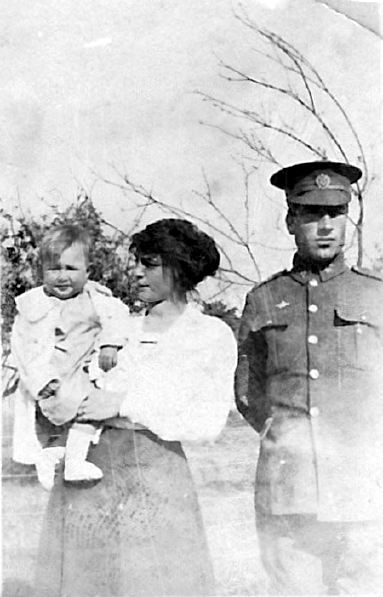 My great grandparents, Elsie Nunns & Alexander Wright - but who is the baby?

Okay, so after a few phone calls between my mother and me, and my mother and a second cousin (who now has the original photo), I think we’ve come to the conclusion, that yes, it is Elsie.  *phew*

What caused the confusion was the identity of the baby, and Alex being in uniform.

Elsie and Alex married in June 1917.  At that point, Alex had been discharged from the New Zealand Expeditionary Force, and that would be why he wasn’t in uniform for his wedding.   So why would he be in uniform in 1919? From checking uniform images online, it does look like an NZEF one.

The other thing is, Alex seems completely disinterested in a. the baby; and b. having his photo taken.  It doesn’t seem like a ‘Happy Family’ type snapshot!

It would be useful to get the photo dated properly, maybe by what Elsie is wearing.  The photo was in the possession of Elsie’s aunt originally – maybe the baby is one of Elsie’s cousins?  The aunt married in 1910, so it’s not unlikely. Perhaps then this was taken before Elsie married Alex, and before he was discharged from the NZEF?

Wordless Wednesday is an ongoing series at GeneaBloggers.