They shall grow not old, as we that are left grow old:
Age shall not weary them, nor the years condemn.
At the going down of the sun and in the morning
We will remember them.1 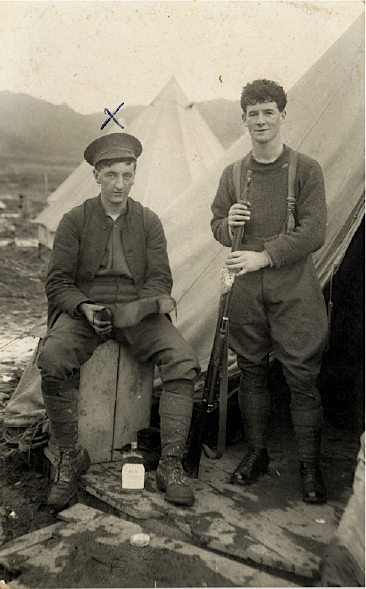 Peter Michael Gaffaney was born in Dunedin, New Zealand on 14 September 1892, son of Francis Gaffaney (Belper, Derbyshire) and Catherine Brosnahan (Co Kerry, Ireland).  He was single, and an indentured carpenter for Wanganui builders Ashwell & McAvery(?) in Wanganui.  He was living at The Pines, 68 St Hill Street, Wanganui at the time of enlistment.  His brother, Francis Dominic Gaffaney, jeweller, of Wanganui, was listed as his next-of-kin.

Peter Gaffaney enlisted on 29 May 1915 at Trentham, having undergone his medical examination on 6 May 1915.  His medical examination describes him being 5 foot 7 inches, weighing 132lb and having a dark complexion, blue eyes, and dark brown hair.  His religious profession was Roman Catholic.  He was assessed fit, despite being rejected as unfit previously because of “bad teeth”.  (They were described as “fair” in this assessment.)

Peter Gaffaney’s service reckons from 29 May 1915.  On enlistment he joined B Coy, 2nd Battalion 3rd  NZ Rifle Brigade as a Rifleman with the regimental number of 24/431.

He left Wellington on 8 October, disembarking in Egypt on 18 November 1915

17 January he proceeded to Ismailia.

6 April he embarked for France from Alexandria.

16 October  he became sick and was admitted to hospital with diarrhoea on 21 October.

28 November he was again admitted to hospital.

9 June he was appointed Lance Corporal

30 June he was admitted to hospital with influenza

4 August he was detached to Lewis Gun School

13 October he was promoted to Corporal

13 October he was detached to Reinfot? Camp

24 November he was detached on leave to UK

1 December he was promoted to Sergeant

22 February he was detached on leave to UK

On 31 May 1918 Peter Gaffaney was awarded the Military Medal for Acts of Gallantry in the Field.2