Where did my lovely Mary Jane come from?

I can’t seem to find her on any census until she turns up in 1891 in Deptford, Kent, when she’s married to my great great grandfather, Ephraim Wright. Her birthplace is given as “Ireland – Monaghan”.1

In the 1901 census, now a widow and living with two of her sons, her birthplace is listed as “Fermanagh, Ireland”.2 Hmmm… these counties are right next to each other, though Fermanagh is (now) in Northern Ireland and part of the United Kingdom, and Monaghan is in the Republic of Ireland.

According to the newspaper clipping I have, she was “born of Irish parents in Belfast”.3 That’s a wee way away from either Fermanagh or Monaghan! Perhaps there was some creative licence used by the article’s author…?

And my cousin Lally says she was “born and raised in Armagh”.4 So, that’s another county! I’d like to trust Lally’s information because she knew Mary Jane personally, but it doesn’t seem to tie in with anything else. I guess Mary Jane could have been born in one place, and then raised in Armagh?

I had been trying to find her in the 1911 census under her married name of Carroll, but not having a subscription to Find My Past meant it would be an expensive credit-chewing exercise checking all the Carrolls in the area. Last night I decided to bite the bullet and sign up – and I found her!

(I wonder if Bridget is perhaps a niece of John’s? edited to add: Bridget’s granddaughter got in contact to confirm that Bridget was John’s daughter.)

Anyway, back to the task at hand.  Mary Jane’s birthplace in the 1911 census is…. “Roslea Monaghan Ireland”.  At last a townland!!  Doing a search using Google maps I found a Roslea/Rosslea in Fermanagh, just near the border of Monaghan, so that makes a lot of sense.  I guess the next step is to find out the actual parish, and then go about hunting down a birth or baptism record.

I’d love to know where Mary Jane was brought up, where she lived until she turns up in Deptford in the 1891 census.   On her second husband’s (Ephraim Wright, my great great grandfather) death certificate, the informant was Joseph Sullivan “brother-in-law”.6 Now, I’ve only ever found a brother for Ephraim, so I wasn’t sure it would have been a sister’s husband.  I figured it was more likely that it was a husband of a sister of Mary Jane’s.  But, you never know, it could have meant a lot of things back then!  So, I searched around and came across a marriage record for a Joseph Sullivan and an Annie Clarke.7 Bingo!  (Well, not gold-plated proof, but I’m an optimist at heart.)  And then last week I listened to my taped interview with my cousin Lalli (after 20 years) and she talked about a Great Aunt Annie, sister of her grandmother Mary Jane, who married an “Irishman”, Joseph.  So, what’s the point of all this rambling?  In the 1901 census, Annie is living with her husband Joseph (Blacksmith, born Sheerness, Kent)  and nephew Joseph Wright (so I know I have the right family), and her birthplace is “Scotland”. 8 Looking back at the 1891 census, I found Annie living with husband Joseph (Smith [and?] Farrier, born Sheerness, Kent), and her birthplace is listed as “Scotland. Edinburgh”.9

So Mary Jane is born around 1856 in Roslea, and by around 1859 the Clark(e)s are in Edinburgh for Annie’s birth.  Somehow Mary Jane is back in Ireland (Co Meath) for her daughter Mary’s birth1, and then in Aldershot for son Percy’s birth10.  Sometimes I wish my ancestors would just STAY PUT in one village for a few centuries.  I guess travel is in the genes.

Now, if I can just pin down Annie’s birth in Scotland, I may find Mary Jane’s mother’s name. O Scottish records, how I do love thee! 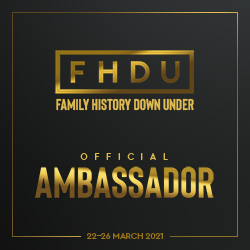