Postcard to a brother

Yesterday I posted a photo of my half great great aunt, Mary (Mollie) Freeth, dressed up in Japanese costume. She sent this postcard to her (half) brother, Alexander Wright, my great grandfather, who was with the Royal Irish Fusiliers at the time.  This is what she wrote on the back: 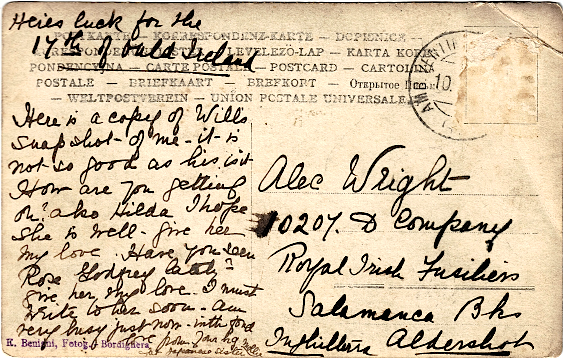 Postcard from Mary Freeth to Alexander Wright, date possibly around 1910

Here’s luck for the 17th of ould Ireland

Here is a copy of Will’s snapshot of me – it is not so good as his is it. How are you getting on? also Hilda I hope she is well – give her my love. Have you seen Rose Godfrey lately? Give her my love. I must write to her soon. Am very busy just now – with fond love from your big fat Japanese sister Mollie.

As far as I know (from family legend), Alexander deserted from the army and somehow turned up in New Zealand. I need to do some digging and find out more about his time with the Fusiliers, and also how he managed to get passage to New Zealand.

Actually, I was originally told he’d deserted from the navy, because of this photo: 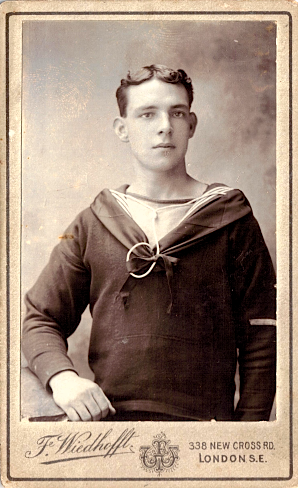 On the reverse is inscribed the name “Alexander”: 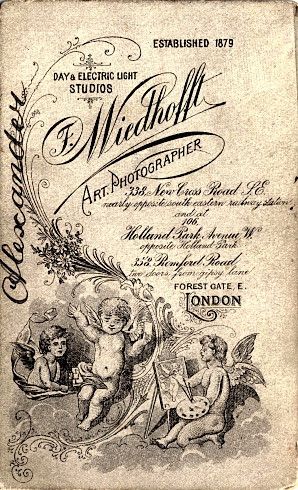 Family members concluded that Alexander had been in the Royal Navy, and had jumped ship. I’ve since identified the mystery sailor as Alexander’s brother, (Ephraim) George Wright, and that it is his handwriting on the back. He obviously wrote on the photograph to whom he was sending it!