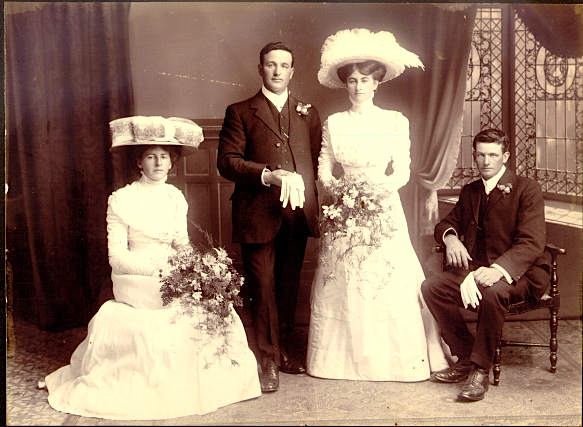 I just adore this photograph!  Isn’t it marvellous?  The gloves!  Those hats!  My great grandfather Peter looks quite the dapper lad, and my great grandmother Margaret so much the lady.

Margaret is the daughter of Bartholomew O’Rourke, yer man from Ballymacdonnell, and Bridget Power.  She was born Margaret Mary/Monica O’Rourke on 7 September, 1885 in Napier, New Zealand, the fifth daughter and tenth child of Bartholomew and Bridget.1

Peter is the son of Michael Gaffaney and Margaret Brosnahan.  He was born Peter Dominic Gaffaney on 14 July, 1879 in Temuka, New Zealand, the fourth son and ninth child of Michael and Margaret.2

Peter and Margaret were married in St Patrick’s Catholic Church in Napier, New Zealand on 9 November, 1909.3

St. Patrick’s Church was the scene of an exceedingly pretty wedding this morning when Mr P. D. Gaffney, of Canterbury, was united in the bonds of matrimony to Miss Margaret Monica O’Rourke, youngest daughter of Mr B. O’Rourke, of the well-known Napier carrying firm. Pontifical high mass was celebrated by the Rev. Father O’Connor, in the absence of the Rev. Father Goggan. Mr James Gaffney, brother of the bridegroom, was best man and Miss B. O’Rourke, sister of the bride, was bridesmaid.

The bride, who was given away by her father, looked charming in a princess gown of ivory chiffon taffeta, yoke of tucked net and trimmed with silk guipure. She wore a large cream picture hat of crinoline straw, with soft tulle ruchings finished at the side with soft flowing plumes. The bridesmaid, Miss B. O’Rourke, wore a pale blue ninon de soie, with yoke and sleeves of ecru net threaded with pale blue bebe ribbon. She wore a large Tuscan straw hat trimmed with cream tulle and embroidery. Miss K. O’Rourke was attired in a gown of cornflower blue eolienne over silk with a yoke of ecru net and beautiful Oriental embroidery. Mrs O’Rourke, mother of the bride, was attired in a gown of black silk, while Mrs McCallum, sister of the bridegroom, was dressed in a brown tailor costume with toque to match.

At the conclusion of the ceremony the guests were entertained by the bride’s parents in St. Patrick’s Hall. Mr and Mrs Gaffney left by the 2.15 p.m. train to spend their honeymoon in the Lakes district of the South Island. The bride wore a navy blue tailor-made travelling dress with hat…

Unto thee a child is born