Following up from yesterday’s post about my great great great grandfather Michael Rourke’s farm in Ballymacdonnell, I’m now looking at the Rourkes who are living there at the time of the 1901 Irish census.

These are the family members listed on the census return1:

Trying to read the scan of the family tree I have, I can make out a Jeremiah, brother of my Bartholomew, both of whom were Michael Rourke’s sons. Jeremiah married Bridget O’Loughlin, and their children were:

Going back to the baptism records2, I found the following children listed for Jeremiah Rourke and Bridget Loughlin (with their approximate age in 1901, given a birth date a month or two previous to baptism):

Hurrah! This looks like the same family. Not sure where Bartholomew is on census night, and Catherine may be married by this time. Doesn’t look good for poor young Jeremiah – hopefully he’s having a sleepover at a friend’s place. But he’s also missing on the family tree…

So, were they living in the same house? It’s hard to be certain, without visiting Ballymacdonnell and asking the locals (which I’d love to do at some point!). In 1901 there were three houses inhabited in Ballymacdonnell, and from the census return (Form B1 – House and Building return), all three look to be similar in size and state, being classed as “2nd class”, with Bridget’s being perhaps a little smaller.

What was the house like that Bridget and her family were in? The walls were “stone, brick or concrete”, the roof was “thatch, wood or perishable material”, and there were three windows at the front of the house. The family of five were living in three rooms. Also on their property were eight outbuildings, detailed in Form B2 – Return of Out-Offices and Farm-Steadings: 1 stable, 2 cow houses, 1 calf house, 1 dairy, 1 piggery, 1 barn, and 1 shed.

When I came to recheck the map of Ballymacdonnell from Griffith’s Valuation today, I discovered something I had completely missed before! It is laid over the modern map, and using a slider widget at the top right hand side, you can switch between the old and modern maps. How cool is that!!?? 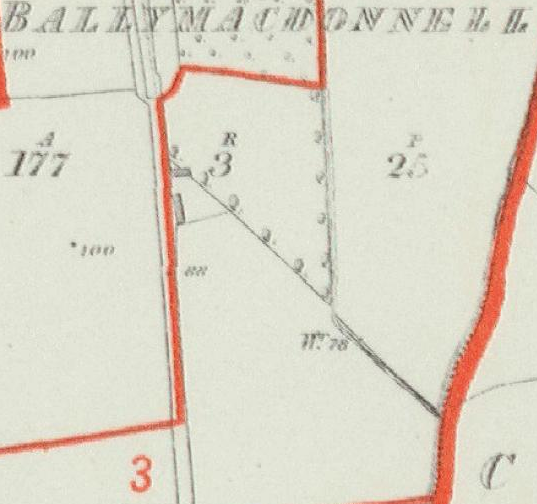 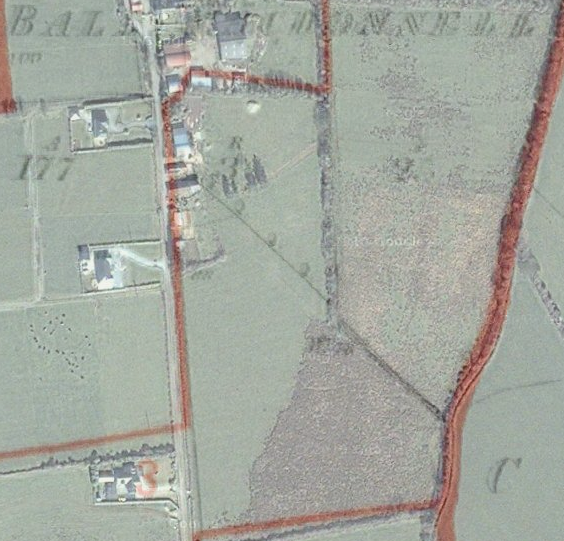 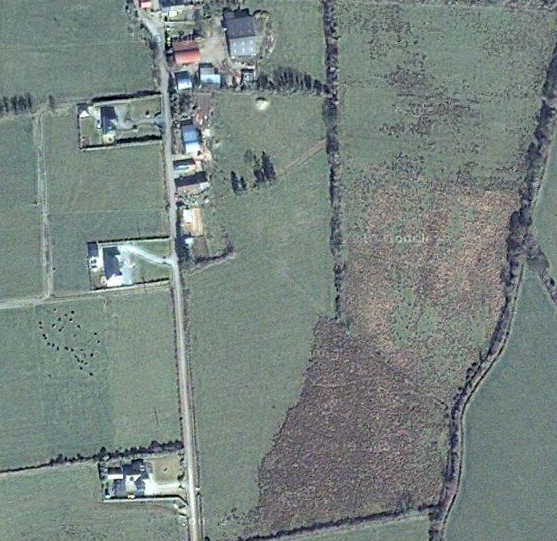 There are still buildings there, maybe even the original house.  Next task is to check the household in the 1911 census.