As their marriage occurred before 1880, the couple’s parents were not stated on the marriage registration. When George died in 1912, sadly neither of his parents were given on his death certificate (as is usual for a New Zealand death registration after 1875).

The only clue to his family was the name of the county were he was born — Staffordshire.

George’s birth year was around 1831, and so I searched for likely candidates baptised in Staffordshire around that time.  My next step was matching those baptisms to families in the England & Wales censuses of 1841 and 1851. I then tried to find each candidate in the 1861 census, reasoning that I could discount any that were still in England at that time. There was one family whose son George fitted the bill.

This was the family of farmer William Tunnecliff and Louisa Phillips of Tean in the parish of Checkley.  Their son George was born on 17th December 1831, and baptised two days later in the parish church, St Mary and All Saints.

1831 baptism of George Tunnicliffe, son of William and Louisa, on 19th December in the parish of Checkley

William and Louisa had seven children baptised in Checkley:

Bethuel was the name of Louisa’s grandfather, and it wasn’t hard to research back with such a distinctive name, but I had to stop! What if they weren’t my family? 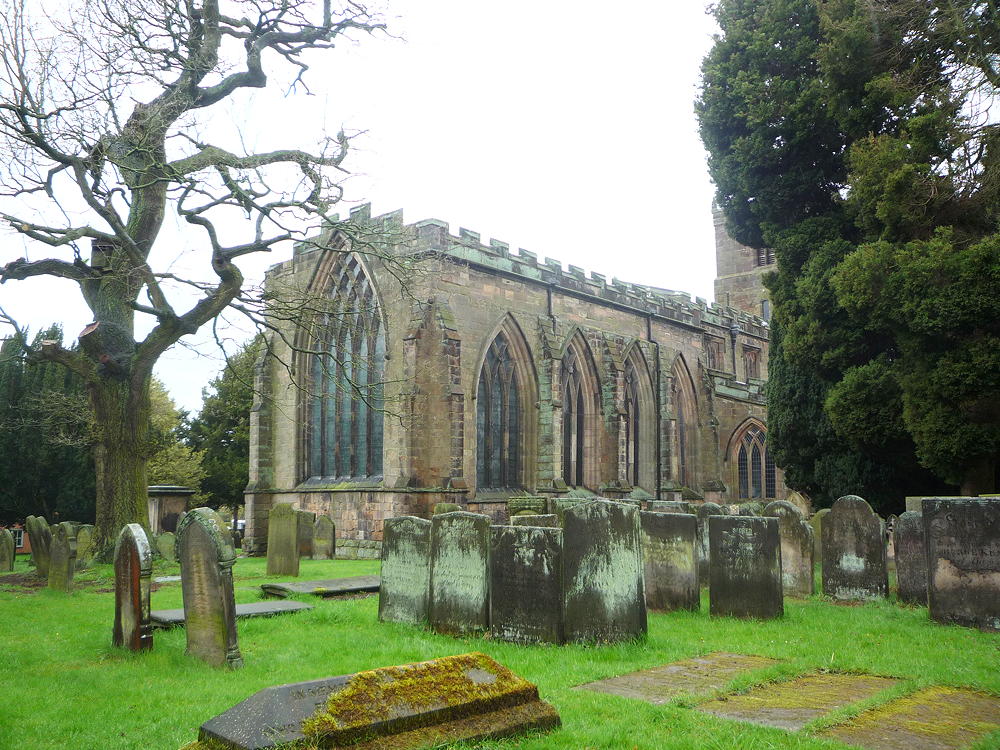 When I posted on this blog about visiting Checkley in 2012, a descendant of that family got in contact, saying she thought George might be a brother to her ancestor, Francis Nathaniel Tunnecliffe. Francis and his brother Edward both emigrated to Australia, so it wasn’t much of a stretch to think that their younger brother also emigrated to the other side of the world.

In 1841, the Tunnecliff family and three servants were living at Hall Green, Tean.1 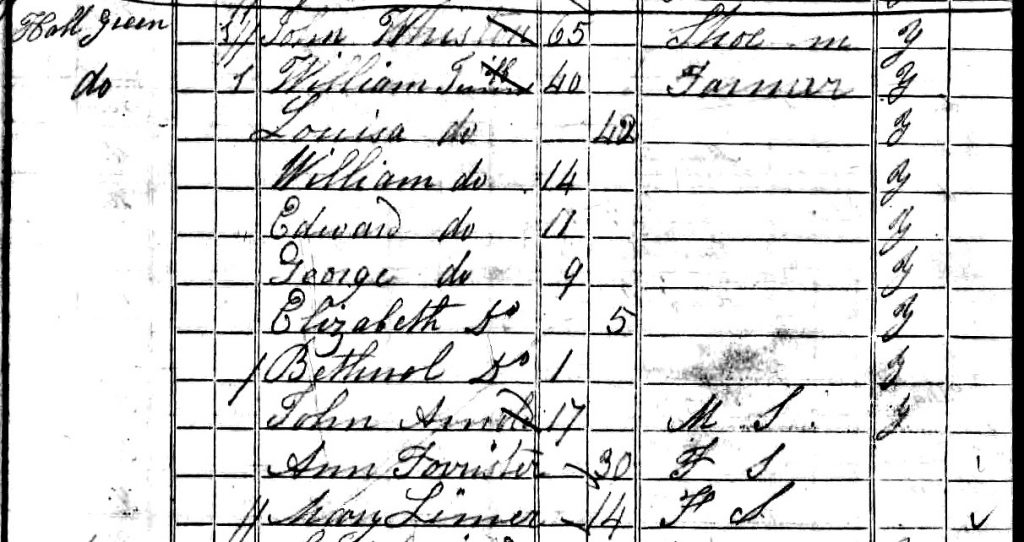 Five of their children were living with them.  Francis was elsewhere, and Georgiana had died in 1838, and was buried at St Michael’s churchyard in Rocester on 18 Apr 1838.2

By 1851, the household had changed markedly.  Son William had died in 1846, and William senior died the following year.

Louisa had moved to Tean Villa and four of her children were living with her: Edward, George, Elizabeth and Bethuel.3 Son Francis was living at Hall Green with his widowed aunt Maria Thweng, Louisa’s sister.4 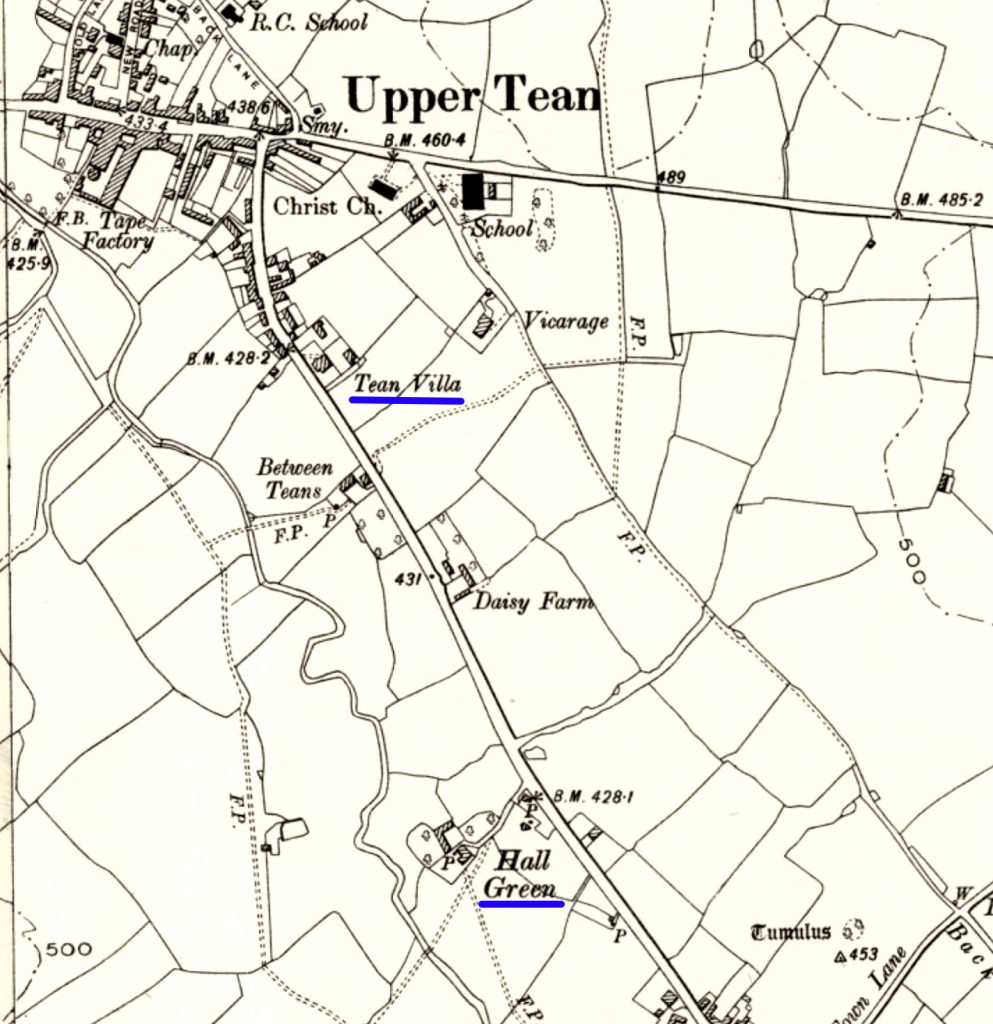 More cousins came out of the woodwork — one descended from the Edward who went to Australia, and another more distant cousin who was descended from William Tunnecliffe’s uncle.

It may have been around the time I was doing assignments on probate records for IHGS, when I thought to look for wills for these Tunnecliffes, specifically Louisa. I hadn’t thought of it before, as none of my other “pre-New Zealand” folks had left much at all, let alone a will.

Louisa’s husband William had died in 1847 without leaving a will, but his father Francis (who died in 1854) left bequests to daughter-in-law Louisa, as well as his grandchildren.  Did this provide the funds for grandsons Francis, Edward and George to emigrate?

Louisa Tunnecliff died in 1879, and in her will, apart from the proceeds of her estate to be split between her children,  she left explicit bequests of numerous items, notably anything large to family still living in England, and much smaller items such as jewellery to those living overseas. Louisa also bequeathed items to her children’s spouses, and their first-born daughters. Frustratingly, she did not name them!  George’s eldest daughter was bequeathed a gold watch and chain, and his wife, two small rings.

Of most significance, there were three items in her bequests that presumably were gifts sent to her from family (or friends?) living overseas — an “Australian ring”, a “New Zealand Picture in Oil”, and a “Satchel and Cover from New Zealand”. Unless Francis and Edward had been gallivanting around New Zealand, I surmised that it was more likely a relation living in NZ would have sent the items from there, namely (hopefully?) my George.

After this, I happily researched the Tunnicliffe and Phillips families, reasonably sure that they were mine. Or was it wishful thinking? Louisa Phillips had come from a well-to-do family and it was a joy to finally discover an ancestral line that had land, houses, wills! At the back of my mind, I still wasn’t 100 per cent confident these were my families.

My parents first had their DNA tested in 2013 at FamilyTreeDNA, and later Ancestry. I haven’t delved too much into analysing their results so far, as I had plenty of paper trails to follow while I was living in England.  Still, I kept checking the matches, seeing if particular surnames cropped up, to confirm what I’d researched so far. Worryingly, no matches ever appeared that linked with the Tunnecliffe and Phillips families in England.

Until a couple of weeks ago when a fourth cousin match popped up for my mother — a descendant of Francis Nathaniel Tunnecliffe, one of the brothers who had emigrated to Australia. Eureka!  I still need a couple more matches to verify the connection, but it’s a great start. 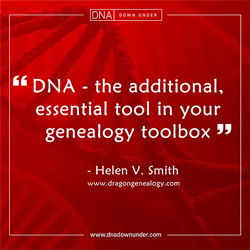 Later this month I’m off to Sydney to attend DNA Down Under, so I’ll get a chance to learn more about DNA analysis and how to combine it with my genealogical research.*  There are some inspiring local and international speakers, and I hope to catch up with a few genie mates as well (and the odd cousin or two!).  If you haven’t checked out the DNA Down Under six-city schedule, hurry!  Here are the pre-booking dates:

There may be tickets available on the day, but to guarantee your ticket, get in and pre-book (plus you go in the draw for a heap of cool prizes)!

While there are presentations for all levels of DNA expertise (even none at all!), I’m planning to do a bit of swatting up beforehand, to get the most out of the event.  If you’re new to using DNA for genealogy, a good place to start is the International Society of Genetic Genealogy website.

*Disclaimer: As a DNA Down Under Ambassador, I get discounted entry for highlighting the event.