My 3 x great grandparents George and Elizabeth Tunnicliff are buried in Grave 56 of St Mary’s Cathedral churchyard, New Plymouth (Taranaki, New Zealand). In 2014 John Pickering, graveyard manager of St Mary’s, spearheaded a project to repair all the old gravestones in the churchyard. Desecendants, where known, were contacted and asked to help fund the project. Through an earlier blog post, some money was raised towards the repair of George and Elizabeth’s gravestone, but the majority was funded by donations from local parishioners.

The churchyard is a Category 1 historical site, and as such, only registered memorial masons could carry out the repairs. As you can see, a wonderful job has been done! Heartfelt thanks must go to St Mary’s Cathedral and its generous congregation, and especially John Pickering, for looking after our heritage sites. 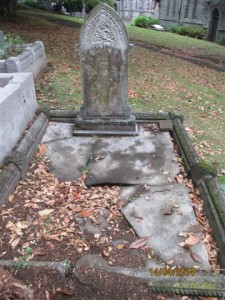 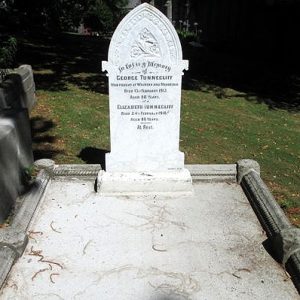 The inscription on the headstone reads: