The last year has been a crazy busy year full of study and work and moving countries. It’s been lovely to look back and see that I actually did manage to cram in some genealogy fun as well.

An elusive ancestor I found was… not an ancestor, but a relative – a missing baby I had heard rumours of, and now have found. Ha!

An important vital record I found was the birth certificate of this missing baby, my 2 x great aunt’s illegitimate daughter.

An ancestor’s grave I found was my great grandmother’s in Taruheru cemetery, Gisborne, along with her husband, parents, and daughter, and it was very moving to visit it at last. 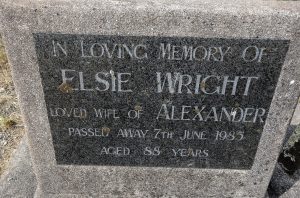 A geneasurprise I received was a framed collage of photos from my fellow IHGS students as a leaving present before I moved back to New Zealand.

A genealogy conference/seminar/webinar from which I learnt something new was Les Mitchinson‘s Report Writing course held in Petersfield, Hampshire.

I taught some members of the public how to start their family history research when I volunteered on the Ask the Experts sessions at Who Do You Think You Are? Live in Birmingham.

A genealogy book that taught me something new was Susan Moore’s Family Feuds: An Introduction to Chancery Records.

A great repository/archive/library I visited was the archives at Tralee Library in County Kerry, Ireland, where I viewed original workhouse records for the area.

A new genealogy/history book I enjoyed was Manorial Records for Family Historians, written by my cousin Geoffrey Barber.

A geneadventure I enjoyed was taking the kids to Belper in Derbyshire, and following in the footsteps of my 2 x great grandfather.

Another positive I would like to share is… after six years of study, 88 assignments, and one exam, I finally completed and PASSED the Higher Certificate of Genealogy from IHGS in Canterbury. O frabjous day! Callooh! Callay!

Thanks go to Jill at GeniAUS again for her great Accentuate the Positive geneameme. You can read about the 2016 highlights of other geneabloggers on the GeniAUS website.