I have just spent two wonderful days at Who Do You Think You Are? Live in London. I had promised myself last year that I would attend all three days in 2014, but with the days changing from Friday – Sunday to Thursday – Saturday, it was all a bit tricky, so two days again it was.

I had an early start on Friday morning to travel in from Kent in time for my first talk: Rosalind McCutcheon on Irish Poor Law records. It was a mix of background history and details of what records might have survived, all delivered in Roz’s inimitable style, and I’m hopeful I may find something for my Irish families. Next up was the “Celebrity Talk” in the main SOG theatre, though it differed in format this time, as it included the producers as well as Larry Lamb talking about the making of the show. It was a lovely insight into what happens behind the scenes, from the production point of view rather than just focusing on the celebrity’s experience. 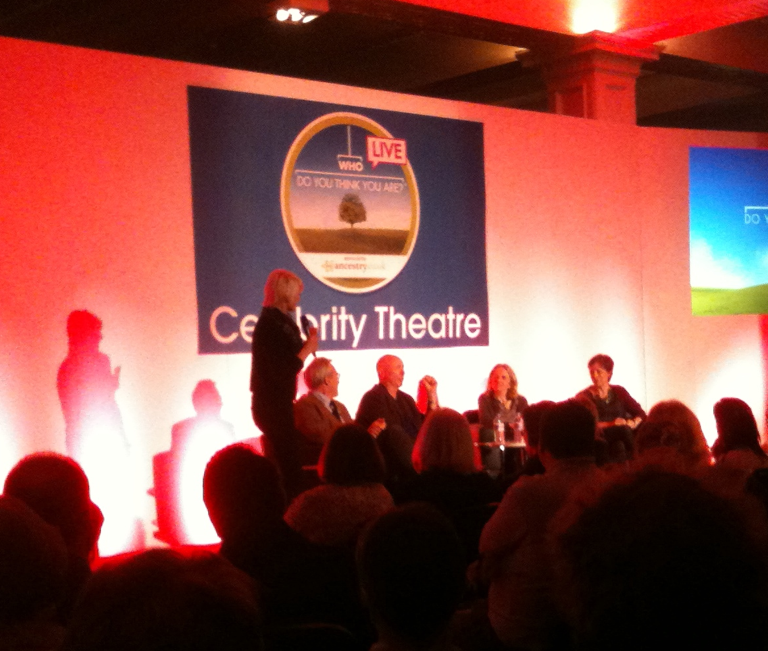 The next talk I attended was Researching Australian WW1 Military Personnel given by Helen V. Smith, and it gave me some great ideas for further research on my Kiwi soliders. After a short wander around the exhibit hall, I listened to Stephen Scarth talking about PRONI online resources, and while I was aware of many of them, there are some exciting resources being made available soon. I’d also overlooked the very useful research guides they provide on their website.

I had booked an Ask the Expert session in the afternoon, and the military expert I requested gave me some very helpful tips on where to go next in my research. Looking around this area, it didn’t seem as busy as in previous years. Perhaps it was busier on the Saturday?

Definitely the greatest value for me this year was meeting lots of lovely genealogists, some of whom I only “knew” via Twitter. I’m always inspired by those making a living out of genealogy, and love how passionate they are about what they do. A “Tweet Up” had been arranged at the end of the day in the Hand and Flower pub across the road from the Olympia, and there were so many of us it got a little crowded in our spot at the back of the pub! I managed to chat to a few people, before heading off to dinner with some fellow IHGS students.

After a late night, Saturday morning came a little too soon, but after a mammoth breakfast and a good brisk walk to the Olympia from my hotel, I was ready for another day of genealogical delights. I only attended two talks this day, with the first being on the Scottish Poor Laws from Patricia Whately. She gave an overview of Poor Law legislation in Scotland, and the many records that were created as a result. Kirsty Wilkinson has compiled a list of those records that survive, which can be accessed (along with other resources) on her website : My Ain Folk [archived version]. 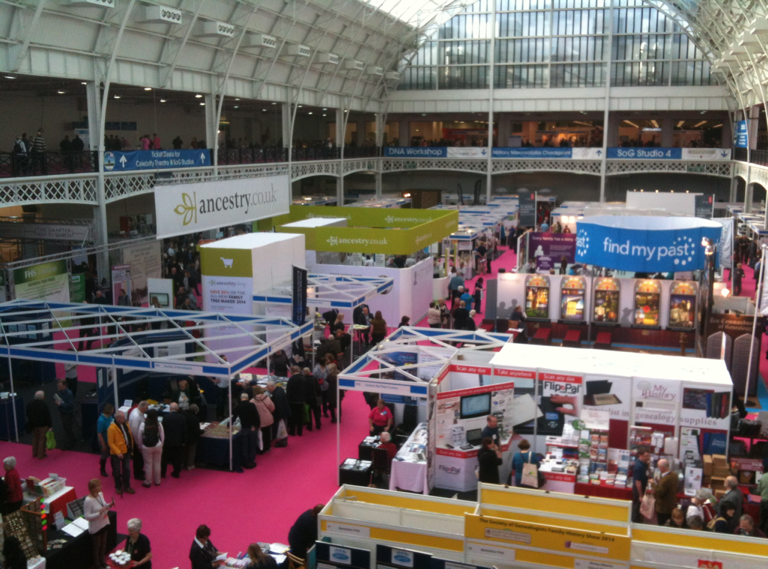 After another couple of meetups, Tweet Ups and walk around the stands, I was off to my second talk of the day: Janet Few on Putting Your Ancestors in their Place: Sources for Reconstructing 19th Century Communities. I found this a great follow up to the recent One Place Studies course I’d just completed with Pharos, and I’m keen to get a hold of Janet’s new book, Putting your Ancestors in their Place: A Guide to One Place Studies.

Somehow I managed to sign up for not one but TWO online courses – just couldn’t resist the “show special” prices. The Pharos One Name Studies course included a GOONS membership. Bonus! The Palaeography course through the National Institute of Genealogical Studies was one I’d been looking at doing, and I couldn’t resist the 50% discount, plus fountain pen. Double bonus! Both start next month, so I shall be a little busy, I think.

I was disappointed to miss a couple of talks that were scheduled for Thursday, but luckily the one I most wanted to see has been recorded and can be viewed online: Maurice Gleeson’s Autosomal DNA – a step-by-step approach to analysing your atDNA matches.

Over the two days I met some fantastic people, caught up with friends, and learnt a lot from the talks and discussions. There are rumours that next year’s event will be at a different venue (Birmingham?), but hopefully I will be there. WDYTYA? Live will also be making an appearance in Glasgow this August, which will be especially handy for those living further north. A fabulous excuse to visit Scotland, if you really needed one!