When I received a transcript of Mary Jane’s burial details from Lewisham Council, I wasn’t surprised to see she shared a grave plot. But I was surprised to find out that she was sharing it with five other people! (My previous post describes my search for the grave at Brockley Cemetery.)

It’s been a fascinating exercise to see who all these people were.

The plot was originally purchased by “Mr Rio G M Stapley” of 131 High Street, Deptford, on 12th June 1896 for £3, and the memorial on the grave is described as “Flat stone & Curb set on Landing (Full Memorial)”.

I can find no “Rio Stapley” in the censuses, but living at 131 High Street, Deptford, in both 1891 and 1901 is Michael P. Fannen, an Irish-born Roman Catholic priest, along with two other priests and a couple of housekeeping staff. Should “Rio” be “Rev”? It looks like the grave was donated or paid for by the local church, or perhaps a kind parishioner.

Person no. 1
On the 15th of June 1896, 17 year old Edmund Carroll was buried there. From checking the censuses, it appears he was the second son of John and Honorah Carroll, born in Deptford, Kent. His birth was registered in the September quarter of 1878 in Greenwich. (John Carroll was my great great grandmother’s third husband.)

Person no. 2
Honorah Carroll was buried in the same plot on 10th of February 1900, and was 55 years old. The censuses show her to be John Carroll’s wife, and give her birthplace as Co. Kerry, Ireland. 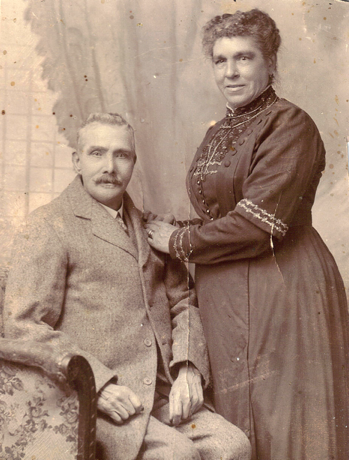 Person no. 3
The third person interred was 41 year old John Carroll, eldest son of John and Honorah, buried on 8th February 1918. He was also born in Deptford, and his occupation in the 1891 census was pupil teacher.

On the 18th of February in 1918, the ownership of the grave transferred to Mr John Carroll of 180 Evelyn Street, Deptford.

Person no. 4
Johanna Colligan (transcribed as “Colhgan” in the burial register copy) is listed as the fourth internment on 16th of March 1918. She was 44 years of age, and John and Honorah’s eldest child. She married Richard Colligan in 1901, and they appear to have had three children: Honora in 1902, Michael in 1905, and Margaret Mary in 1910.

By March 1918, John Carroll had lost his wife and three of their four children.

On 4th of March 1932, the ownership transferred to Mary Freeth (no address given), Mary Jane’s eldest daughter.