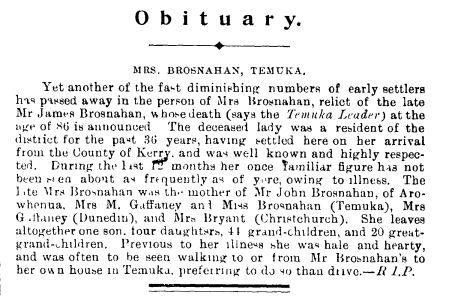 Yet another of the fast diminishing numbers of early settlers has passed away in the person of Mrs Brosnahan, relict of the late Mr James Brosnahan, whose death (says the Temuka Leader) at the age of 86 is announced. The deceased lady was a resident of the district for the past 36 years, having settled here on her arrival from the County of Kerry, and was well known and highly respected. During the last 12 months her once familiar figure has not been seen about as frequently as of yore, owing to illness. The late Mrs Brosnahan was the mother of Mr John Brosnahan, of Arowhenua,  Mrs M Gaffaney and Miss Brosnahan (Temuka), Mrs Gaffaney (Dunedin), and Mrs Bryant (Christchurch). She leaves altogether one son, four daughters, 41 grand-children, and 20 great grandchildren. Previous to her illness she was hale and hearty, and was often to be seen walking to or from Mr Brosnahan’s to her own house in Temuka preferring to do so than drive.1

Annie Collins was my 3 x great grandmother.  She was born about 1816 in Co. Kerry, Ireland to Patrick Collins and Ann Seeler(?)2, and married James Brosnahan around 18383. Their son John and daughter Margaret (my great great grandmother) emigrated to New Zealand in 1862, and Annie and James followed a few years after with the rest of their family.

This obituary helped me to follow up the rest of my great great grandmother’s siblings. I knew about Catherine, who had married Francis Gaffaney, the brother of Margaret’s husband, Michael Gaffaney.

This photo is apparently of Catherine and Francis: 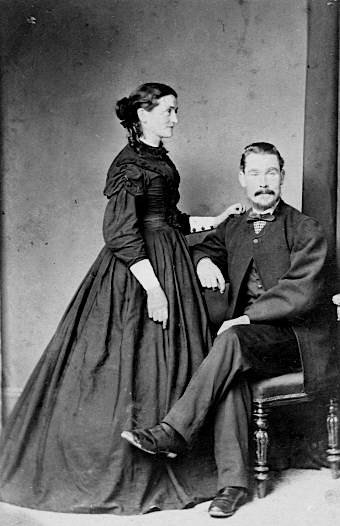 They married on April 16th, 1874 in Timaru, South Canterbury, and made their home in Dunedin, Otago.4

From Annie and James’ death certificates, I knew they had one son and four daughters living at the time of their deaths. After going through old photographs with my father, he told me about Annie Brosnahan, Margaret’s sister, who lived next door to the Gaffaneys – she was nicknamed “Queenie” and where she lived was called “The Queen’s Paddock”. 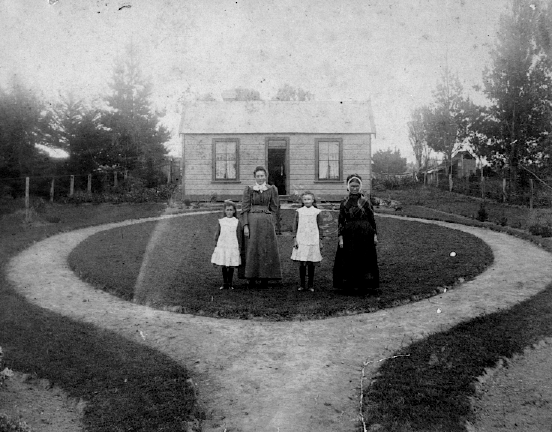 Caption on reverse: The Queen's Paddock, Queenie being Annie, next door to Belper House

I wonder who the other woman is in the photo? Taking a closer look: 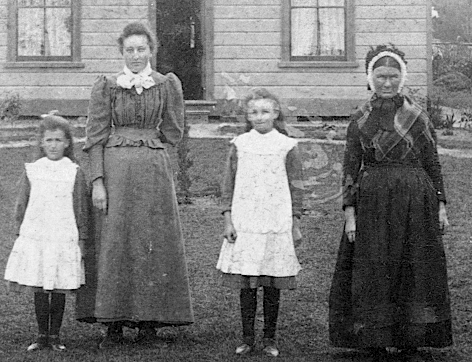 I wonder if this could be Annie’s mother, Annie Collins? From what the younger Annie is wearing, I’m guessing maybe the photo was taken early 1890s..? Annie Brosnahan never married, and is buried with her parents in Temuka Cemetery.5

So then I just had one remaining daughter to find: Mrs Bryant.

I found an Ellen Brosnahan who married Daniel Bryant in 18706, and found a few references to them, but haven’t been able to confirm anything so far – that may require ordering a certificate or two.

John Brosnahan in the Cyclopedia

Where there’s a Will, there’s a way ~ Amanuensis Monday