Some weeks back I posted a photo I took of St Mary’s church in Polstead, Suffolk.  It’s a beautiful old village church, and when we visited back in August, we could just walk in and take a look around.

Inside, I picked up a copy of Polstead Church and Parish1 for a small donation, and the following information comes from there. 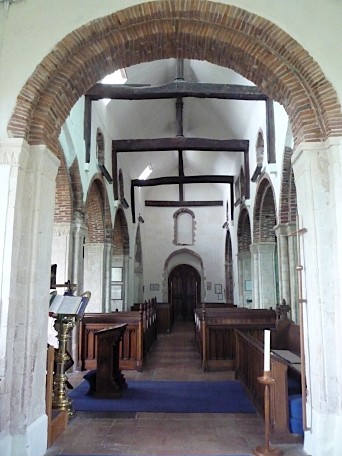 The  church was built early in the reign of Henry II, probably about 1160 A.D. and was dedicated to Saint Mary.  There have been two major alterations to the orginal twelfth-century Norman church, one towards the end of the fourteenth centur and another about 1510-1520.

The interior of the church is given a unique appearance by the use of brick and tufa blocks (a porous stone used for building at Rome and Naples) in the construction of the nave arches – Norman arches of brick are very rare; there is no other church like this in the whole of Suffolk. 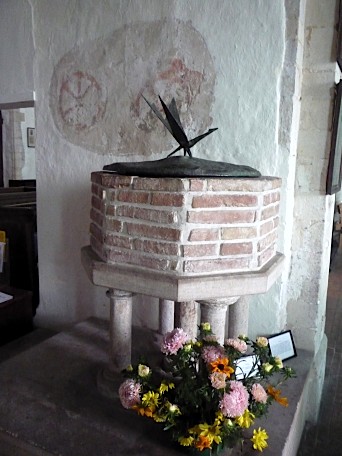 The plain baptismal font probably dates from the 13th century, and was completely restored in 1961.  The original base has been enlarged and the lead bowl with drain has replaced the original.   The original 17th century wooden font cover has been replaced by one made of fibre-glass, in a symbolic design design of the Dove and undulating waters of Baptism. (It was designed by a nun of Oxford, who had trained at the Slade School of Art.)

There is much architectural joy to be discovered in this church.  I found it to be a very lovely and simple place of worship, with lots of historical bits and bobs to savour.  It’s where some of my Wright ancestors were baptised and married, and some buried in the graveyard. 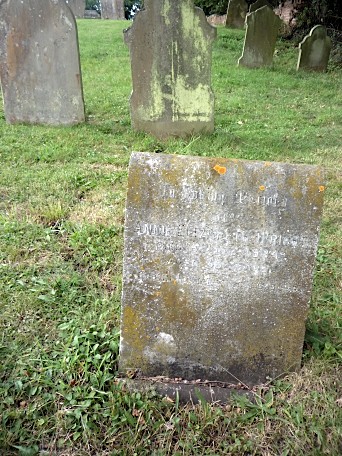 iwiKiwi is one year old today!