Following up from yesterday’s post,  where I was wondering how and when Alex Wright (my great grandfather) came out to New Zealand, I do know that he arrived before the outbreak of World War I, because he enlisted in the New Zealand Expeditionary Force (NZEF) on 23 August 1914 at Awapuni.1

War had been declared just 19 days earlier, and the army had set up a training camp on the grounds of the Awapuni Racecourse, Palmerston North.

The military camp at Awapunu is the largest in New Zealand, and it is understood it will be continued for some time.  General Godley expressed himself yesterday as highly delighted with the arrangements and suitability of the site for military training.

The Manawatu Racing Club has been warmly thanked for placing their grounds at the disposal of the military authorities.  Fresh troops are expected to arrive shortly for training purposes.

At the time of enlistment, Alex was single,  working as a labourer with the Public Works Department in Gisborne, and living at 53 Bright Street.  In his attestation, he declared that he was a deserter from the 1st Battalion Royal Irish Fusiliers.  He gave his mother, Mary Jane Carroll, of 180 Evelyn Street, Deptford, England, as his next-of-kin.

His medical examination describes him being 5 foot 9 inches tall, weighing 11 – 4lb and having a dark complexion, brown eyes, and dark brown hair.  His religious profession was Roman Catholic.  Distinctive marks:  Tattoo, Clasped hands Left, Clasped hands Right, H. Cavender on Right arm.  He was assessed fit and he joined the Wellington Infantry Battalion as a Private with the regimental number of 10/800.

A couple of unidentified newspaper clippings that the family had kept were an interesting find: 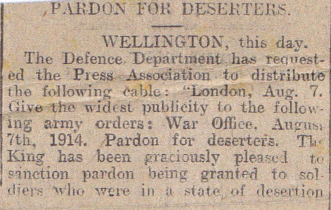 The Defence Department has requested the Press Association to distribute the following cable: “London, Aug. 7.   Give the widest publicity to the following army orders:  War Office, August 7th, 1914.  Pardon for deserters.  The King has been graciously pleased to sanction pardon being granted to soldiers who were in a state of desertion.3

As showing the fighting spirit of the true Britisher, it may be mentioned that two reservists, who were deserters from their regiments, have offered their services to proceed to the front.3

My Nanna and me ~ Wordless Wednesday