How apt that today I am posting my great grandfather’s obituary – on the 55th anniversary of his death.1 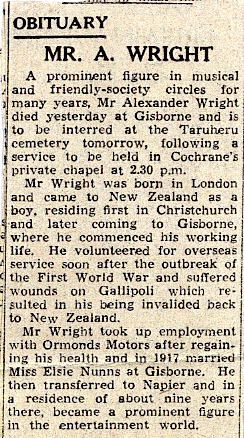 A prominent figure in musical and friendly-society circles for many years, Mr Alexander Wright died yesterday at Gisborne and is to be interred at the Taruheru cemetery tomorrow, following a service to be held in Cochrane’s private chapel at 2.30pm.

Mr Wright was born in London and came to New Zealand as a boy, residing first in Christchurch and later coming to Gisborne, where he commenced his working life.  He volunteered for overseas service soon after the outbreak of the First World War and suffered wounds on Gallipoli which resulted in his being invalided back to New Zealand.

Mr Wright took up employment with Ormonds Motors after regaining his health and in 1917 married Miss Elsie Nunns at Gisborne.  He then transferred to Napier and in a residence of about nine years there, became a prominent figure in the entertainment world.2

I wonder if there was more to the obituary? It doesn’t sound like it’s quite finished – unless it was published in a Napier publication, and so only included information pertinent to that locality?

The obituary answers a few questions we had about Alex, though it raises several more!

How did he get to New Zealand “as a boy”? He’s definitely in England in 1901 (with his mother Mary Jane in Deptford), and I have a postcard addressed to him when he was in the Irish Fusiliers based at Aldershot – the postmark looks as though it is dated April 20, 1911.3 (I’m no expert – but it looks similar to those I found online).  If I’m correct about the date, Alex was still in England at 20 years of age. 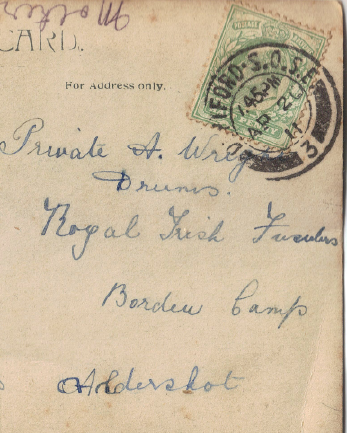 Postcard addressed to Private A. Wright, from his sister Lavinia 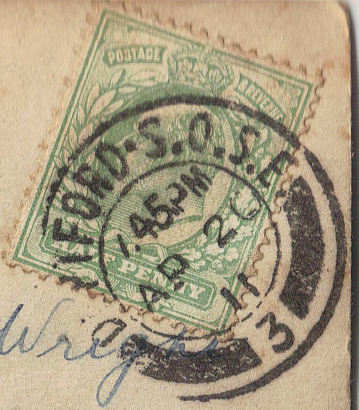 On the front of the postcard is a photograph of the sender, his sister Lavinia Wright: 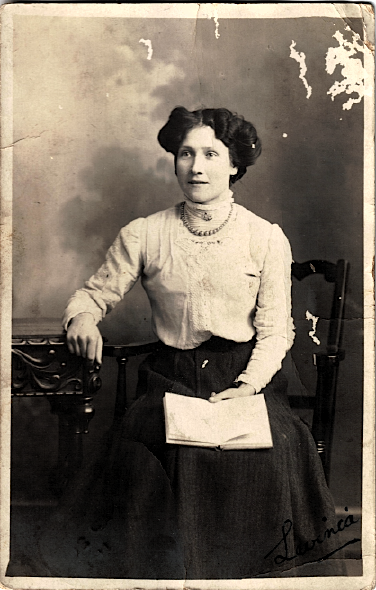 Postcard sent to Private A. Wright, from his sister Lavinia

I found a possible reference to him in the 1911 census4, with the 1st Battalion Royal Irish Fusliers and correct age and birthplace, but he’s listed as “Alexander Patrick John Wright”, so I’m not entirely convinced this is our Alex. The middle names look as though they’ve been added afterwards, perhaps (and there are another couple of instances of this on the same page).

I also discovered an A. Wright on several ship crew lists5:

They could all be the same person, or maybe no. 2 is our Alex?  He was definitely in New Zealand by 1914, when he enlisted with the New Zealand Expeditionary Force.