Every Saturday night Randy Seaver sends out a Saturday Night Genealogy Fun challenge at Genea-Musings.  Usually I miss out because of the time difference, but this week I thought I’d just post a day late!

Our mission was to list our 16 great great grandparents, along with their birth, marriage and death dates. Then, determine their birthplaces, and (for extra credit) create a pie chart showing their countries of origin.

On 26 Dec 1863 when Michael was 27, he married Margaret BROSNAHAN in the Catholic Chapel, Christchurch, New Zealand.

On 2 Sep 1869 when Bartholomew was 25, he married Bridget POWER in the Roman Catholic Church, Charleston, West Coast, New Zealand.

On 2 Feb 1861 when Martin was 21, he married Ann PHILP in St John’s Catholic Church, Perth, Scotland.

On 17 Jan 1859 when John was 33, he married Bridget MAHONEY in Galbally, Co Limerick, Ireland.

On 11 Jan 1896 when Sam was 21, he married Alice COCKERHAM in Oulton Church, Oulton, Yorkshire, England.

Michael McGONNELL. Born abt 1840 in Newry, Co Down, Northern Ireland. Michael died in Waiongana, Taranaki, New Zealand, on 5 May 1929; he was 89. Buried on 7 May 1929 in Te Henui Cemetery, New Plymouth, New Zealand. Occupation: Signalman, Farmer, Boatman.

On 28 May 1888 when Michael was 48, he married Louisa TUNNECLIFFE in New Plymouth, New Zealand. 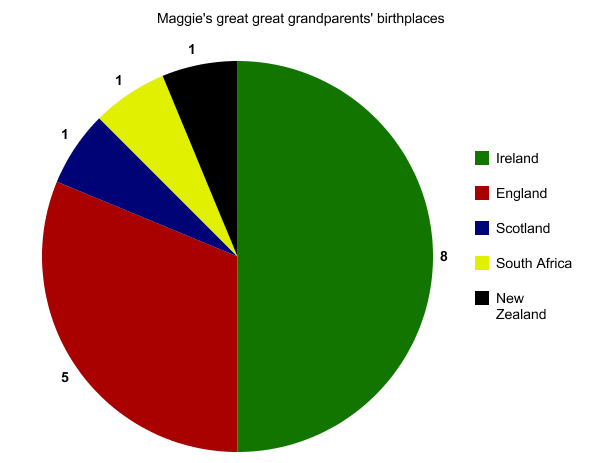 And as an added bonus for readers, here’s a pie chart showing final resting places. 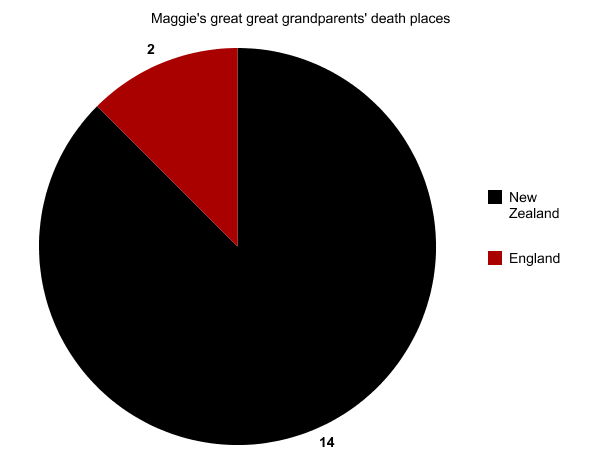