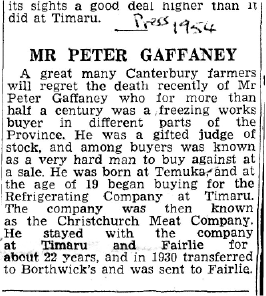 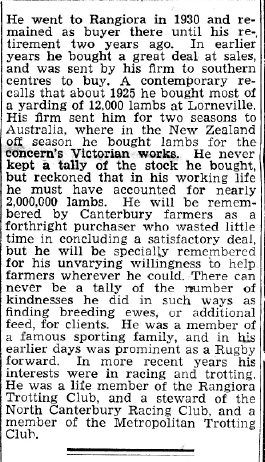 A great many Canterbury farmers will regret the death recently of Mr Peter Gaffaney who for more than half a century was a freezing works buyer in different parts of the Province. He was a gifted judge of stock, and among buyers was known as a very hard man to buy against at a sale. He was born at Temuka, and at the age of 19 began buying for the Refrigerating Company at Timaru. The company was then known as the Christchurch Meat Company. He stayed with the company at Timaru and Fairlie for about 22 years, and in 1930 transferred to Borthwick’s and was sent to Fairlie. He went to Rangiora in 1930 and remained as buyer there until his retirement two years ago. In earlier years he bought a great deal at sales, and was sent by his firm to southern centres to buy. A contemporary recalls that about 1925 he bought most of a yarding of 12,000 lambs at Lorneville. His firm sent him for two seasons to Australia, where in the New Zealand off season he bought lambs for the concern’s Victorian works. He never kept a tally of the stock he bought, but reckoned that in his working life he must have accounted for nearly 2,000,000 lambs. He will be remembered by Canterbury farmers as a forthright purchaser who wasted little time in concluding a satisfactory deal, but he will be specially remembered for his unvarying willingness to help farmers wherever he could. There can never be a tally of the number of kindnesses he did in such ways as finding breeding ewes, or additional feed, for clients. He was a member of a famous sporting family, and in his earlier days was prominent as a Rugby forward. In more recent years his interests were in racing and trotting. He was a life member of the Rangiora Trotting Club, and a steward of the North Canterbury Racing Club, and a member of the Metropolitan Trotting Club.1

Some of the details in this obituary seem slightly out – like when he was transferred and to where, doesn’t seem to tally with other information I have. I think it will be helpful to work out a timeline of his life, see how everything fits in.

There’s no mention of any family, or other personal details, which is a bit disappointing.  I’m intrigued by the referral to his “famous sporting family”. What’s that all about? Something else to investigate!