After I found the baptism records of all those Rourkes,  I wanted to find the place where the family was living.  I had the name of the parish and the townland, so thought I’d have a good chance of finding them in Griffith’s Valuation.

The Primary Valuation was the first full-scale valuation of property in Ireland. It was overseen by Richard Griffith and was published between 1847 and 1864. It is one of the most important surviving 19th century genealogical sources.1

I know that my family was definitely in the area around this time because of the baptism dates, so I did a search by name on “Rourke” within the parish of Killeentierna. No result. So I tried a place name search on the townland “Ballymacdonnell” instead – result! A Michael Roarke [sic] occupied property lot number 3 – I hadn’t found him initially because of the (transcribed) spelling of his name.

The Valuation lists the main occupier of the property, not necessarily ‘head of household’ like the census reports. In the report above, Michael’s holding of “House, office, and land” is 37 acres, 2 roods and 21 perches in size. An “office” is a term used to describe “factories, mills and farm outbuildings such as a stable, turf shed, cow barn, corn shed, or piggery.”3 Michael had one office apparently – I wonder what it was?

The taxable value of the property is an estimate of the income the property could generate in a year. The state of the buildings on the property, and the quality and location of the land were all taken into account. The value of Michael’s property, land and buildings combined, was £28 15s. which equates to the spending power of today’s £1,682.74. 4 That doesn’t sound a lot!

The other thing I noted from the report is that in neighbouring lots were two Callaghans – Jeremiah and Michael. Could they be Michael’s brothers-in-law? 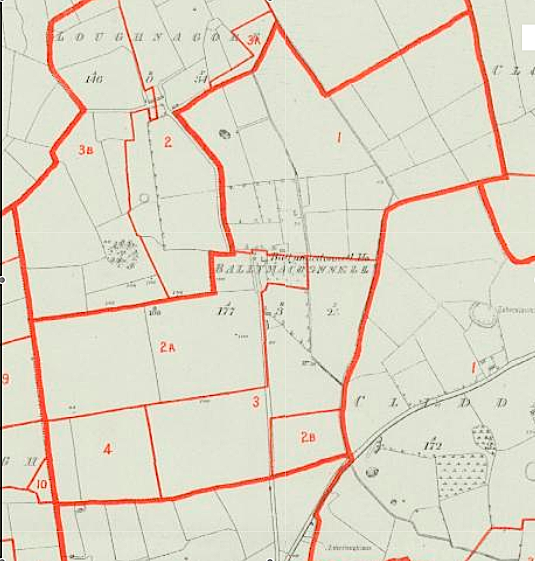 At this time in Ballymacdonnell there are four lots: two with one house (lots 2 & 3), one with no house (lot 4), and one with two houses (lot 1). From the notation in the far left column, John Griffin occupies 1a, the farmer’s house on lot 1, and Mortimer Flynn occupies 1b, a labourer’s or cottager’s house. As John Griffin is listed in the “Immediate Lessers” column beside lot 1b, it is likely that Griffin was subletting the “House and garden” to Flynn.

I’m interested in the houses because there’s a Rourke family living in Ballymacdonnell in the 1901 census. Are they on the same farm, and in the same house? Are they “my” Rourkes?