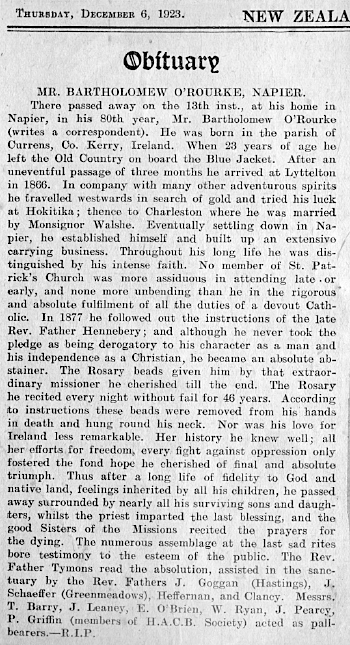 There passed away on the 13th inst., at his home in Napier, in his 80th year, Mr. Bartholomew O’Rourke (writes a correspondent). He was born in the parish of Currens, Co. Kerry, Ireland. When 23 years of age he left the Old Country on board the Blue Jacket. After an uneventful passage of three months he arrived at Lyttleton in 1866. In company with many other adventurous spirits he travelled westwards in search of gold and tried his luck at Hokitika; thence to Charleston where he was married by Monsignor Walshe. Eventually settling down in Napier, he established himself and built up an extensive carrying business. Throughout his long life he was distinguished by his intense faith. No member of St. Patrick’s Church was more assiduous in attending late or early, and none more unbending than he in the rigorous and absolute fulfilment of all the duties of a devout Catholic. In 1877 he followed out the instructions of the late Rev. Father Hennebery; and although he never took the pledge as being derogatory to his character as a man and his independence as a Christian, he became an absolute abstainer. The Rosary beads given him by that extraordinary missioner he cherished till the end. The Rosary he recited every night without fail for 46 years. According to instructions these beads were removed from his hands in death and hung round his neck. Nor was his love for Ireland less remarkable. Her history he knew well; all her efforts for freedom, every fight against oppression only fostered the fond hope he cherished of final and absolute triumph. Thus after a long life of fidelity to God and native land, feelings inherited by all his children, he passed away surrounded by nearly all his surviving sons and daughters, whilst the priest imparted the last blessing, and the good Sisters of the Missions recited the prayers for the dying. The numerous assemblage at the last sad rites bore testimony to the esteem of the public. The Rev. Father Tymons read the absolution, assisted in the sanctuary by the Rev. Fathers J. Goggan (Hastings) J. Schaeffer (Greenmeadows), Heffernan and Clancy. Messrs. T. Barry, J. Leany E. O’Brien, W. Ryan, J. Pearcy, P. Griffin (members of H.A.C.B. Society) acted as pallbearers – R.I.P.

Bartholomew O’Rourke is my great great grandfather, and I am descended from his daughter Margaret.

I think this clipping was a marvellous find, stashed away amongst my father’s family papers. I can’t be certain which newspaper it was published in, but from the style and language, I’m fairly sure it was the New Zealand Tablet, a monthly Catholic newspaper. I hope to check up on this next month.