I was still on the hunt for Henry Richard Florey’s dad. My next step was to check the Yalding parish records to see if the priest/curate had made any additional notes on the register that didn’t make it into FamilySearch. (Else Churchill, Genealogist at the Society of Genealogists, gave a great talk about this at Who Do You Think You Are? Live last year.) Even a note of “illegitimate” would be useful!

One of my problems, as a decided beginner at this family history lark, is that

So it’s a slow (but very interesting) process of discovery. I had looked at Phillimore’s Atlas and Index of Parish Registers in a local library and checked where copies of the Yalding parish registers were held for the years I needed – Centre for Kentish Studies in Maidstone [now the Kent History and Library Centre].

Using the search facility on Access to Archives on the National Archives website, [now included in their Disovery catalogue] I could also check exactly what I needed to ask for at the Centre.

Looking back over the catalogue now, I wish I’d spent more time preparing beforehand, before I rushed in. However, the staff at the Centre were great, showed me where things were and set me up with a microfilm reader, and away I went. Located Henry’s baptism record very quickly – no new information (I thought), but I made a note of the details and took a print of it.

Next I went on to Wateringbury records – I was trying to find any mention of the Elizabeth Florey household from the 1841 census. I checked the settlement orders (removal into and out of Wateringbury) and the overseers rates from 1838 to 1843 (I realise now it would be unlikely for my household to be mentioned in here, but you live and learn). No joy, but there are plenty more records to check – I just need to pick the right ones! And now I’ve been into the Centre, it will much easier to go again. I also now have a Reader’s Card.

When I came to scan the printout of Henry’s baptism record, I looked quite closely at the handwriting, thinking it was pretty messy with the “scribble” and cross out. Then I looked a bit more closely… could that “scribble” just before “Son of” be “Ill.”, abbreviation for “Illegitimate”? If only I had discovered this at the Centre, so I could check other records. But wait! Further down the page, just three records below Henry’s, there was the same “scribble”, and it was another record where no father was listed! 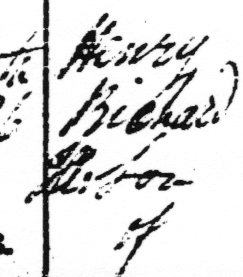 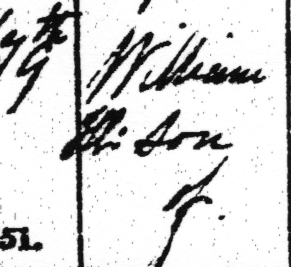 From that, it looks pretty likely to me that Henry was illegitimate.

Disclaimer: Phillimore’s Atlas and Index of Parish Registers is authored/edited by Cecil R. Humphery-Smith, who is the founder and former Principal of the Institute of Heraldic and Genealogical Studies, through which I am currently studying. Or should be studying, if I wasn’t spending so much time working on this blog.

And down the road to Yalding